Boy is Anthony sick!  He was upstairs from last night at bedtime, 8:00, until 6:00 tonight.  He went from his bed to our bed to Veronica's bed and that was it.  He has a fever but it's not so crazy that I want to force Ibuprofen on him but he was the puniest I have ever seen him or any of my children, for sure.  Around 6:00 he seemed to really perk up and was tearing around like usual, he ate quite a bit, so I am bullish for tomorrow.  He missed school AND swimming, though! A first! 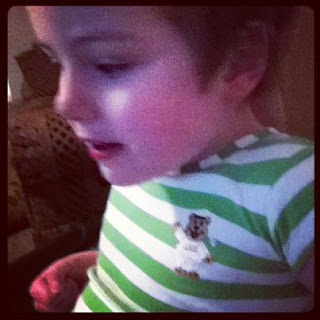 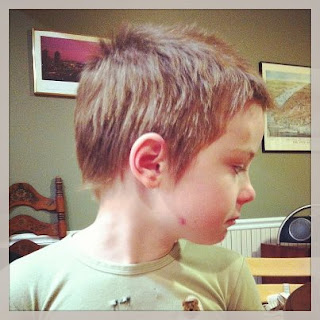 I was talking to a friend last night and he got a very dark and cloudy look on his face and I thought, I wonder what's wrong?  Is he going to tell me he's sick?  Or I'm sick and only he knows it?  How's Anthony?, he asked, head down.  I said, he's fine, he's getting so big, there is like no little boy in there anymore.  His legs are so long and skinny!  Still, his face didn't change, he seemed just as sad as when I thought he had cancer.  It occurred to me while I was talking that he totally sees Anthony as bad news.  He sees his life as worthless, having no accomplishments, just not worth anything.  He sees him as only a source of sadness and misery.

What do you do with someone like that?  He doesn't have any idea about our reality, obviously.  I think he is just looking at it if it were HIS situation.  He has grown children, grandchildren, everyone is fine, normal, etc., so I guess maybe that's it?

Anyway, any time I talk to him about Anthony, I feel like I am talking about some really sad situation and it's so strange.

Our weekends are crazy.  I mean, seriously.  I don't think anyone would believe the craziness involved with just being here with our kids and especially Anthony.  He is - he craves physical movement and, if I'm honest, DANGER.  How in the world we are supposed to stop him from climbing on everything in this house, especially as he gets older?  I have no idea.  So I guess it DOES sort of suck, I mean, it definitely does, but it's not so sad, I guess is what I mean.

Because maybe I am a cock eyed optimist, but I think it will get better, all present evidence to the contrary. Stupid scumbag Anthem has cut their reimbursement to Anthony's school and we are having to pay a lot more money to them now than we have in the past, but as I told my mom today, we can get the money, we can find it.  It will work out, I suppose.  When I am in it, and it's so hard and hopeless, I don't think it will work out but you can't go around in your whole life thinking the direst thoughts you have, can you?  I can't.

This is no way to wrap up, here's an up thing - Maria and Veronica are going to start going to Anthony's school one afternoon a week and do some peer modeling or something.  I think it will be great for them to go to his school and learn a little bit more about autism and where he is for so much of the week.  I wish Felicity could go too, ha!
Posted by Joanne at 10:13 PM 1 comment: