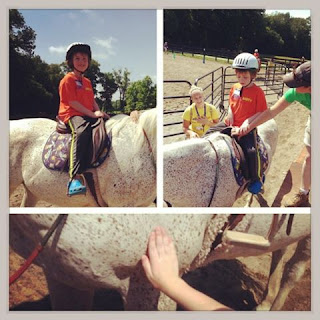 Last week we went to our interview about Anthony's helper dog.  It was on Thursday and it was such a busy day, of course.  The girls had their last day of Vacation Bible School, and we wanted to do the interview in the morning so Anthony wouldn't miss much school.  Anyways, Mike and Anthony went to the meeting for 9:00 and Felicity and I dropped off the girls at VBS and met the boys there.  The meeting was in a big, giant, empty room, save for a few chairs and a table.  The idea was, I guess, that Anthony would just act like Anthony so they could get a clear idea of who he was.  Ha ha boo hoo, I guess he wanted to show them everything because of course he pooped while we were there!  Anyways, the woman was so nice, so reassuring.  We are always following Anthony around, making sure he doesn't break anything or whatever and the woman basically told us that he wasn't going to do anything that she hadn't seen before, and the point was to SEE him, so sit down, ha!

Of course I cried during the interview.  I mean, I am not an ugly, loud crier, like Bradley Cooper or something, but still, it's embarrassing that tears are sort of running down my face for more than half my life.  It just - it sounds so GOOD, it sounds like something that could change our lives and I mean, I hate to be mean, but our lives could use some changing.  We spend so much of our time scared of what is happening with Anthony, will he fall down off something, will he POOP on something, at some point are our neighbors going to get sick of seeing his naked ass in the yard?  Mostly, of course, we are scared of him running away.  This woman was blithely saying, we can train the dog to bark every time Anthony gets near the door, and we can play a game called "Where's Anthony?" with the dog, so that the dog can always find Anthony.  And then - and this is the part that really made me cry - I was saying that Anthony has such sensory issues, that he is so tense, and she said that they could train the dog to HUG Anthony and oh jeez louise.  I am crying now, thinking of it!  I mean, that would really be a dream come true, to think of Anthony having a buddy and a friend, and he could just pet the dog and then his oxytocin levels would raise and um, it was just too much.

The bad news is that it could be a long wait.  It could be THREE or FOUR years, which is too much and I mean, who even knows what he'll need in three years.  But it could be as soon as November and I am just going to pray that that's how it happens for us.  A lot of crappy things have happened to us over the last several years, so I am just going to expect that finally a good thing will happen that we really need.  I would appreciate any and all prayers and good thoughts that it will all work out.