Anthony has been listening to music via Spotify on his iPad.  His team at school has been working with him getting his headphones, going to the Spotify app on his iPad, and choosing his playlist.  Yesterday was the first day we listened to music on the way home, I mean, he listened to it on his headphones, and he seemed to like it.  We always listen to music, classic and guitar-driven rock, super loud, on the way home, but he gets frustrated when there are too many commercials.  There are always too many commercials, ha!  He's doing really well with it, and I think it might be great if he could bring his iPad and headphones to church so we could all go.

Things continue to be good with our dog.  Anthony and she both seem to be settling in.  Mike noticed yesterday that she eats all her food when you give it to her.  Previously she just would eat a tiny bit and leave a bunch of it, and Mike says that shows that she's getting used to living here.  Anthony is getting used to her too, he's not as surprised when he sees her for the first time in the day.  Mike saw him sitting on the couch with her the other day, just laying his arm on her body, which is so sweet.  We have been trying to teach him to pet her instead of waving his fingers in front of her face, and we are having limited success, which I'll take.

Mostly I feel like things are going good.  We had an upsetting experience with Anthony's new pediatric neurologist but we are getting a new one.  This dude WAS the new one, so it's a pain but honestly.  We have to be able to find a neurologist who isn't a complete jerk, right?  This most recent guy had us take Anthony for an MRI, and he had to be sedated and he missed the whole morning at school.  Then the doctor's assistant called and said that his MRI was 'abnormal' but not 'dangerous' but the doctor wanted to meet with me and Mike to talk about it.  We made an appointment for the next week and went in but the woman in the office asked where Anthony was and said the doctor wouldn't see us unless we brought Anthony.  They really expected that we'd say oh, okay, and we'd leave and make another appointment for when we could bring Anthony!  I asked to see the assistant, I still had the voice mail on my phone where she said for ME and MIKE to come in and never mentioned Anthony.  This woman who came out, good Lord.  She was SUCH a jerk, she came out arms folded, chin up, churlish and childish and awful.  She said it was THEIR POLICY that the patient had to be there and I said well honey, you should have told me that because now I'm not leaving until I see that doctor and he tells me about the MRI of my son's BRAIN.  Ugh, so then the doctor came out, and shook my hand, the creep, his handshake was just like you'd expect, all warm and weak.  Anyways, he said that there were signs of perhaps a loss of oxygen at birth and that there was some grey matter which should be outside the brain was inside the brain and that's why he has epilepsy.  I said so it doesn't have anything to do with the fact that he has autism and he said nope, pure coincidence.

This seems like BS to me.  I know people who have had a loss of oxygen at birth and a lot of times they have - well like, a friend of mine's son has cerebral palsy, and autism.  I have another friend whose sister had a loss of oxygen at birth and she has cerebral palsy and intellectual development disorders.  I mean, I know Anthony has autism, obviously, but he has never presented as having intellectual disorders.  He is really smart, he was a smart baby and he is a smart ten year old.  Also, it just seems so crazy to me that he just happens to have epilepsy when he has autism too.  Like, a lot of kids with autism have epilepsy and half of those kids are non verbal.  All this plus the fact that we know like 1/1000 of what there is to know about the brain leads me to believe this is bs.  But we are getting a new neurologist and I guess we'll figure it out. 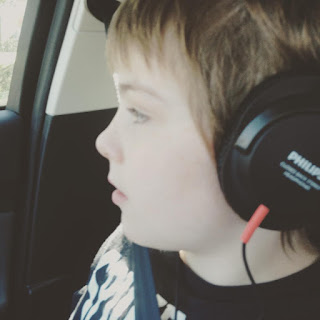 So we had a new dog come over yesterday and I guess she is going to be our new dog.  I think the woman from the rescue place is bringing her over on Wednesday night and I am taking her to be spayed on Friday morning.  It's so strange that they are just giving us a dog, I feel like when I have a baby and we leave the hospital.  I think, surely there are more tests than this?  You're not just going to trust us?

Anyway, her name is Maggie and she is much more of a puppy than I would have thought I'd like.  But we weren't having any luck with older dogs and I don't really want to get an older dog who is going to die in just a few years, I think that would be upsetting.

Anthony took a LONG time to warm up, honestly, he was freaking out, stranger than he's ever been with a dog before.  Mike and I were fighting the urge to be despondent about it, the girls were really excited and adorable, Maria especially, but it was SUPER annoying because they wouldn't stay away when we were trying to inch Anthony in near her.  Finally he petted her but - I mean, I felt like he was a little kooky with her, waggling his fingers near her face and sort of yelling.  He was really excited!

Oh I hope it works out.  I hope that some damned thing works out for us some time.
Posted by Joanne at 8:21 AM 1 comment: