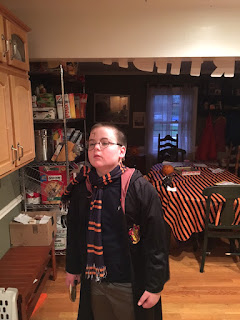 Halloween! He was Harry Potter, obvs. 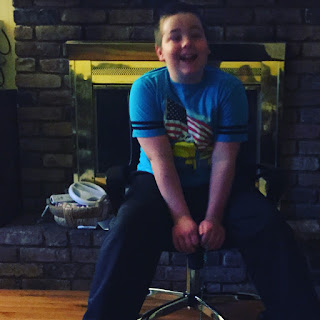 Good Lord! How could it be so long since I've updated Anthony's blog? I feel like I am the worst mother to him, and now I'm forgetting his blog too?  I used to be good at at least that!  Well.  I don't take so many pictures of him anymore, so often I need both hands when I'm with him.  He is - he can be wild, to understate it.  I hear myself telling people things - well, like the other night I was telling his speech therapist how I would like to work with him on maybe a schedule because he seems so crazed, sometimes, when we are on our way home.  I pick him up almost every day, and sometimes he gets really wound up, and he punches me/pushes on my arm so hard that I have to remind myself to not put my right hand on the steering wheel because I have nearly driven into traffic several times.
So.  That's a pain, right? I don't want to take pictures of it! So we are working on, as EVER, communication.  I feel like when he pushes me like that he really wants something.  I don't know what.  On his iPad the other day, he was saying "rainstick" and "trampoline" which are both things he has at Little Star.  So I thought maybe he is afraid every time when we leave Little Star, maybe we won't go back? So I am trying to be clearer about saying we are leaving now, we will go home, then have dinner, (go to swimming, whatever) and then TOMORROW you can go back to Little Star.  On Friday of course I can't say that but he has been going to music therapy for a while on Saturdays so I can say that, I guess.  Everything is terrible since we don't have anyone to do respite anymore.  There was a moment two weeks ago when I thought maybe we could have it but it was a false alarm because the person they thought they could get didn't drive, couldn't drive because of some sort of problem with their record.  MMMM kay.  So they were like, we have someone! But they can't do transportation! And I was like, um, okay but can they meet us at our house and go to the stuff that Anthony wants to do?  NOPE.  They were just supposed to come over and I guess, stay at the house with Anthony, which would be great ON OPPOSITE DAY.   So anyway, that was disappointing.  Then last night, Mike and Anthony were getting ready to go to swim like every damned Thursday of their lives when our case manager just STOPPED BY to say that she needed to schedule a meeting.  They were late for swimming because of this pop in! And she couldn't really say when she could meet but she just ... came by, I guess to make them late for swimming or maybe that was just a lucky happenstance.  UGH.  This medicaid thing is awful and it makes me SO PARANOID - I think, they get all these people off the wait list and then they say you have THIS MUCH MONEY! Yay! But that translates to a certain amount of hours because the places that you go through only pay their people like $10 an hour, $11 if you're lucky, although $11 was what the last nimrod we had made and she was awful and I still get really mad when I think about her.  Anyway, they don't pay well and they can't hire anyone and then we can't get any care for Anthony, it's been through MOST of the year, and that money - guess what happens to that money?  It all just goes away from us and right back to the stupid state, even though it is DUE to ANTHONY.  So I guess if I were Indiana, maybe I'd dole out a lot of money but to a lot of people so that it doesn't do any good to anyone and then I'd get to keep the money?

We have been struggling a lot because we used to have respite care and now we don't and Anthony suffered this giant setback when he had to stop going to Little Star and we are just trying trying trying to get back to where we were, which wasn't great but it was better than it is now.