Anthony is going to be 12 in two months! Crazy!

He is doing okay, he is hitting me less, which I think is a combination of him improving and also me not being around much.  I've been working a lot and busy with the girls stuff so we haven't seen each other too much.  He has been getting out a little bit more with his respite girlfriend, the weather has been better, they've been swimming and going to parks.  I wish he had more time with her, or with someone, but it's an imperfect system.  Even though his place pays pretty well, we can't find anyone to do this job.  He should get 12.5 hours a week of respite and we are lucky to use six.  We are trying, but it is trying, too.

Last night I took Maria and Felicity to Maria's first baseball game.  I was talking to this other mom, who also has four kids, Boys 13 and 11 and girls, 7 and 5.  This mom was saying how she is such great friends with other parents from school, how much stuff they do with other baseball families, which just makes sense, it seems, because their boys have played baseball together, been together a LOT for six months out of the year for the last seven years.  I was thinking how nice that would be, to be social and friendly with people because you have things in common, things that your kids do together so you do them together.  We just don't have that and it's too bad, because I really have always enjoyed being friends and social with people.  I don't think Mike cares as much but it feels really unnatural to me to not be friends with people.  It's a strange situation.

Anyway.  Anthony is going to be doing this bike thing this summer and you have to buy a bike, so I am going to ask people who would give him a birthday present to contribute to his bike fund.  I am looking into how much it costs, I have so much to do, it seems, recently.  I'll be glad when the girls are done with school and we can relax a little, ha ha just kidding! 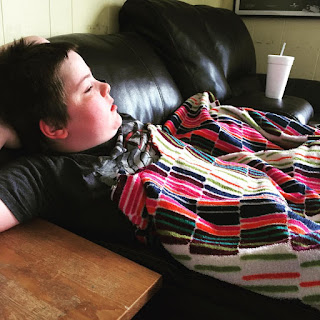 Posted by Joanne at 9:31 AM No comments: