There Will be Blood 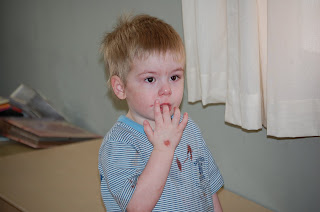 I drink your milkshake! I drink it all up!

Anthony fell today, off something in the livingroom. I think maybe the coffee table that we have told him 9,000 times not to stand up on. I was upstairs changing Maria and heard the screams. I came downstairs and he had blood everywhere, so I dropped Maria in her seat and got a towel to wipe him up - I couldn't tell where the blood was coming from but it was just his nose, thank God. He was really crying, his hands were covered in blood and it was all over the floor, so I could see why. He seems fine now, his eyes look fine and he's a little bit stuffed up but otherwise fine. We keep trying to teach him how to blow his nose, but so far no dice. I wish I could have taken a picture at the impressive amount of blood, but I felt like I had to clean it up first to see where it was coming from. I was really afraid he had knocked out a tooth or something.