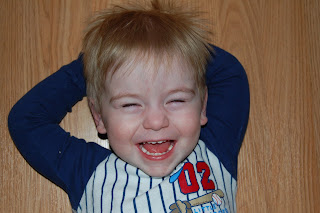 So in July, Anthony will start a summer version of his new preschool. Mike and I brought him to an assessment yesterday at IPS. He was observed by a child psychologist, an occupational therapist, a speech therapist, a social worker, and a classroom teacher. We all were observed, I guess. In very short order, the psychologist asked us if we had ever considered that Anthony had autism. I said yes, that people had mentioned it to us, we had done a lot of reading on it, and we knew he had severe sensory issues, and suspected that he would be found on the autism spectrum. Autism, like colic, is just symptoms. We knew he had the symptoms, so I guess it follows that he has the condition. I told the psychologist that I felt like Anthony had many symptoms of autism, but that he also seemed to be somewhat in control of himself, more than other kids with autism that I've observed. He will appear to be in his own world, but Mike or I will mention a cookie, or a bath, or something, and he snaps to right away. She said that that's why there is a spectrum of Autism, some kids are on the lighter end, and some kids aren't. She tried to get Anthony to do some tests, but he wasn't really participating. He was tired and knew something was up, all these women were looking at him and saying "Hi Anthony!" and he was giving them his usual attention, which is to say, NONE. We were there for a long time, we answered a lot of questions and the conclusion that we came to is that he will be best served in a developmental preschool run by IPS. At first I was dismayed because I had been hopeful that he could go to a community, i.e., a 'normal' preschool and have the therapists come there but he is not really coming around in therapy in such a way that it would work out for him in a regular preschool. So in the beginning of July for five weeks he'll go to his preschool every day for 2 hours. They can go for four hours, or less days a week, but they felt that for consistency's sake maybe every day would be better. Then in the beginning of August he'll start school, also every day, until next May. He'll be in school, just like I've always dreamed about! ;) I am really terrified, of course, but I am hopeful. We know that Anthony is a really smart person, he is very tenacious and also, he is a great dancer. I think he will be fine. I know friends and family members who have children who are on the autism spectrum and have been really successful with therapy and school, so why shouldn't we? They asked us yesterday what we wanted for Anthony - not in a specific way, but in a general way. It was really hard for me to answer because I want what everyone wants, right? I want Anthony to be happy and healthy and loved and loving and never have anything bad happen to him. So we are going to try and make that happen. We love Anthony and I think we are really lucky to be where we are, this is a great school system and this program is supposed to be wonderful. So wish us luck and say a prayer for Anthony.
Posted by Joanne at 9:05 AM