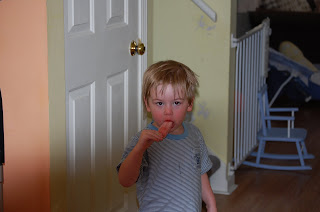 We sent the digital camera with my parents to NJ, we didn't want to mess with it on the plane, so I am putting up an old picture for this entry. Anthony went to his 3 year appointment yesterday, Mike took him. He is 39.5 inches tall and weighs 39.5 pounds, so that's easy to remember. It feels like more pounds when you're carrying him or holding him up over your head! His doctor said he seems fine, we got a recommendation for a developmental pediatrician and we are going to have another assessment in August. He also had a blood test, to see if he has lead poisoning (we don't have an old house but we have old soil, or something) and to check his iron, since he rarely eats meat. Our doctor called last night and said both things are fine, so that's good. He is as crazy as ever, he was in the damned toilet again today (face first - ewww!) and played in the car while I vacuumed it, but he's doing fine.
Posted by Joanne at 12:34 PM

Hope you had a good trip...and welcome to the 3s!!! (ugh.) Xavier was also the same height and weight at his check-up-38 lbs. 38 in. How funny-I wonder if that's normal. Hope Maria is doing well (and sleeping well!) Aubrey STILL gets up twice and is getting a bottom tooth!