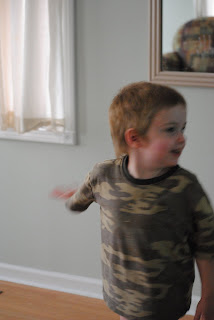 Poor, forgotten Anthony. He is in school all day and then we are all crazy when he is home, through bedtime, and I never get any pictures. I took these yesterday. He had a kind of a rough morning and then had a good, but calm (?) day at school. He also had a little rash on his side that's all gone now. Who knows what goes on. This mornng, he is at his public school so he'll be home for a long day. I hope he does okay, usually he's not wild about being home.

He is doing okay. He cried a lot last night and we both went up, he was *extremely* sad. It's so hard and confusing, because on the one hand, of course you feel sorry for him. But on the other hand, holy loud!, and I'm afraid he's going to wake up the girls. Veronica fell yesterday and bit her tongue and I was hoping she'd sleep all night and not need any more Tylenol. Also, he will be crying his heart out one second and then laughing uproariously the next second, so you kind of feel like you are getting played. You're not getting played, he really doesn't have the ability to do that, but it FEELS like it. Anyways, then he calmed down and eventually he went to sleep. He has been on a pretty regular sleep schedule here lately, it's much bettter than it was this time last year. I don't want to say too much about it.

So things are just the same as ever, Mike went out of town and came home, we should all be home now through the end of the year. Thank GOD. 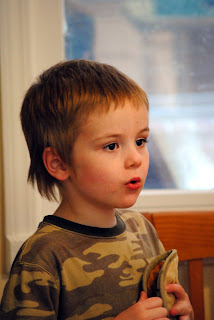