Right now he loves those hangers. It's better than knives, which he used to favor, remember? He's not quite tall enough to reach the hangers in the downstairs closet, so he'll come and get me and when I prompt him, he'll say "hanger". It's not a bad thing, I suppose, to like to play with, but it's still a pain. He only likes the one hanger for a while and then he drops it and wants to get another one. Some of them, he has snapped the bottom in two, and he doesn't like that. So don't break them, I tell him, but he doesn't get it.

He had a pretty good week, I think he was happy to be back at school and back on a schedule. His sleep was much better. I think his days at school are going okay, too, so that's good. Today was his last day of swimming for a few weeks, they are finished with the summer sessions at the Y. It got a little screwy for us at the Y where he was going, they switched directors, etc., so maybe he can go to the WAVES program at another Y, we'll see.

We are trying to ignore his tantrums and it seems to be going well. It is very challenging to ignore such heartbreaking cries and yells, but we have to. Any reaction that we have is too much reaction and, I think, is confusing to him. I don't think he can help having the behavior, but I think we can help our reaction so that's what we have to do. It's so screwed up, I hate it, but we have to keep trying different things to make it better. If I had one wish to be granted, it would not be that he would sleep better, or that there was a magic 'go away autism' pill or whatever. If I had one wish to be granted, it would be that I could know more. That I could have more support and more help and more information. I think this and then I think I actually do have more information available to me, I just have to keep plugging away and trying different things until something works. There are no experts for us to count on, not in the way that we need to count on them. All we can do is keep cobbling together information and make something work for Anthony and try not to lose our damned minds in the process. So. That's what we're doing. That and buying more hangers, ha! 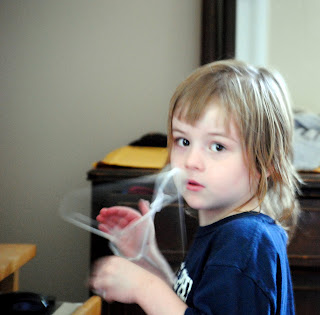