On Monday of this week, Anthony's speech therapist and the assistant clinical director (I think that's her title) brought Anthony home and we worked on how we'll use PECS at home.  It's hard, it's hard to do anything with these GIRLS here, but we managed and it was actually pretty funny.  Anthony's speech therapist made a book for the girls, too, which I thought was incredibly smart and sweet.  Smart because maybe if they had one of their own, they'd leave his alone and sweet because it is really nice of them to think about Anthony's siblings, too.  I read all these articles about GLASS SIBLINGS or SAD SIBLINGS of kids with autism and although I think mostly it's bunk, I do try to be thoughtful of the girls and possible jealousy or whatever.

Anyways, we have his book and it has mostly food in it, as that's Anthony's big motivator right now.  It's pretty simple - he is walking around the kitchen, and seems to want something and I say "get your book!" and he does.  Yesterday in the morning he was in the kitchen and pulling me around and I said 'get your book!' and he got it, ripped off the raisins, I got some and he ate it.  Poof!  He's cured!  Ha, kidding!  Still it was nice to have such instant gratification.

We are going to continue to work away on it, I imagine we'll have better opportunities on the weekend.  During the week, we are really only with Anthony for a brief time in the morning and then for dinner time, and bath time, for a total of like three hours a day.  On the weekends, we'll have more time to see what he wants and how he can communicate that.  I don't know what the weather will be like this weekend, but surely we can't continue to have such nice weekends, right?  Time will tell, I guess.

Next Thursday is Thanksgiving already, that's crazy, right?  Anthony is just off Thursday and Friday but the girls are off all week, ugh.  Every time I mention it on Facebook, I get yelled at, but it is super annoying to me that since they started preschool at the end of August, they have been off for one week in October, now one week in November, and then two + weeks at the end of the year.  Lord, that seems like a lot!  It's hard for them to get a groove going and it's hard for me to not get really sick of them, ha!  Anyway, maybe we'll find something fun to do.

I am hoping to keep track of our PECS stuff here, Lord knows if I'll have the chance but that's my hope.  I am only able to type this today because Felicity fell asleep on the way home from preschool.

Oh I forgot!  Anthony got a spider bite and his whole face swelled up!  Well, just one side and his eye but it's been awful.  It's hard especially because he looks so different.  When someone doesn't talk to you too much, or at all, it's hard when they look different too, because that's all you have.  But that's just how it's been hard for me, it's been hard for poor Anthony because his vision is affected, he's had to take Benadryl which makes his stomach messed up, and it must itch.  I would like to state publicly that if ANTHONY COULD CATCH A BREAK, I WOULD APPRECIATE IT! 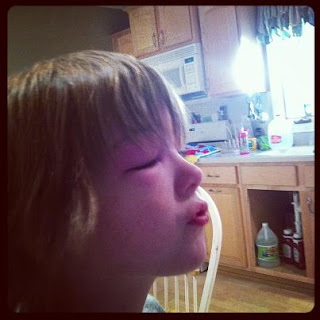