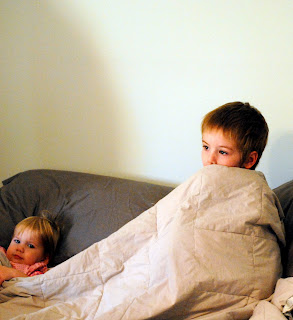 I have been thinking about the term 'refrigerator mother' lately. I know that I was never cold or ... absent from Anthony or whatever, when he was a baby, or really ever. He was breastfed, I never put him down, hardly! I did and do love him so much I feel like my heart will break sometimes. I don't worry or feel guilty that I made Anthony have autism. BUT. Lately I think I can see why a person would look at a mother like me and think that I'm cold. Anthony has been having these meltdowns for about seven months now, almost every day, sometimes worse than others, but on the average, pretty bad. His OT said this week that he had a meltdown and she did some exercises with him to ease his 'tummy pain'. I asked her, did he have pain? She wrote back to me and said that she thought he had "pain" (her quotes) that was maybe caused by constipation, maybe not, maybe gas? I am just - what the hell? Not to get too far into Anthony's personal private digestive system but he has never been constipated and I've also never known him to have gas.

So I have to start, all over again, with another professional and say YES we took him to the doctor and NO they do not think he has any stomach problems. It is exhausting and annoying and also it makes us worry that maybe there is something wrong? But I am not going to fall prey to that kind of thinking. I feel like when he was a baby, like everyone says it's ME and what I'm FEEDING him and then I say, hey wait! How can you fix his stomach by running the blow dryer? And then everyone is quiet.

So. Tonight Anthony had a terrible, terrible meltdown, out of nowhere, same as usual. He was really crying and I said to Mike, just let him go. I said I can't do it one more time and I have to do the dishes anyway. So I did the dishes while Mike stayed with Anthony downstairs, he was screaming and crying bloody murder the whole time, maybe 15 minutes. And I was thinking, I have to be a little bit cold about it. I have to sometimes just want it to start, so it will end. It scares the girls and it scares Mike and me, and I'm SURE it scares Anthony. But if I wasn't a little bit hard to it, a little bit cold about it, I would just go around crying all the time and who the hell would that help? You have to steel yourself a little bit and if it comes off as cold or whatever, I think that's too bad. I think of those poor women who a DOCTOR told, 'this is your fault'. I can't even imagine. It's already hard enough, we're already so nervous all the time, we never know how he is going to wake up, how much he is going to scream, if he is going to flop his body on the hardwood floor, will he flail and hit the girls, etc., etc.

Um..I'm trying to think how to end this on a positive note. It really is positive, sometimes. Often! Lots of people have made donations to Little Star, for which I am very grateful. Anthony is doing very well there, even when he has meltdowns there, he still gets his work done, he is blasting through his goals, and we still love his therapists. We are doing home therapy and we have been going to the park, the museum, the zoo, etc. Things are good, except for when they're not. Which is, I guess, always the way.