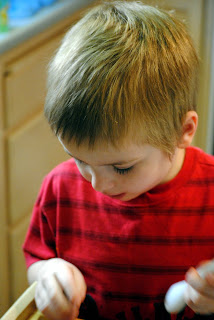 I am still asking for money for Anthony's school, but I want to make a post about his week, so I'm just going to leave the link here. It has been a busy week and in fact, I am typing this around Veronica, who is sitting in front of the monitor, just so I can get it done. I suppose I should find it flattering but mostly I find it annoying. ANYWAY. Anthony's week, you ask? It's been pretty good. It started out not so great, he had a lot of tantrums early in the week, and BAD ones, long lasting and vile. He gets very upset and there is no real reason why. I read in a Temple Grandin book where she said that if a child is having a tantrum and there is no reason for it, that is, they are not trying to get out of something, then there is probably a sensory problem at play. SO. We are working on it. He missed OT at school for two weeks because his OT was sick and he is going to miss next week with his OT at his public school, so I'm glad we're doubling up!

We have been fighting with his insurance company. They are so terrible, it is disgusting what they will try to get away with. I guess there are some people who only pretend to go to speech therapy and I guess there are some speech therapists who only pretend to give people speech therapy. Since insurance companies treat everyone like they are the lowest scum on the earth, they treat us like we are trying to GET AWAY with something by sending Anthony to speech therapy. After 10 months, they decided they needed to see "progress notes" on Anthony's therapy, to see if he's, duh, making progress. If he's not?, I asked them, what happens then? I ended up speaking to this woman who was a HUGE help to me, but she is still kind of the devil because she works for Anthem BCBS. Anyway, she told me if the medical review team thought he wasn't making progess, they would want to stop paying on it. But I could always appeal, she said! In writing! We aren't there yet, where they are refusing to pay, but it's nice to know if we get there, I just have to write one million letters, which I totally have time for.

We are hoping to just get the notes and get them sent in and get the claims paid. Anthony is with a whole nother speech therapist now, anyway, and the billing will be done through his school so Mike and I won't have to get involved so much. I'll tell you what, though, I would not work for the insurance industry in a million years. What a bunch of soul-less scumbags they are.

SO! Back to Anthony! Last Friday we played at the park and we had a great time, this Friday, Amy is coming here. I'm glad that at least the house is clean, because we had that showing yesterday. :) Maria waits all week to see Amy, every child I have loves her to death. I am hoping that we can go to the orchard this weekend, it's supposed to be really nice. We wanted to go last week but it was cold and rainy on Saturday. It's supposed to be like 80 this weekend, so I think we'll be okay. I want to remember this weather in two months when we are all freezing!