Today was Anthony's first art class.  It met last week for the first time, but Mike was sick and the girls and I went to our neighborhood Easter Egg Hunt so this was our first week.  I worked last night and got home at like 1:00 this morning so Mike let me sleep in until after 8:30, which is FOREVER for me.  Then I got up and raced around because St. Vincent de Paul was coming to get a couch and a tv, so I was vacuuming and cleaning the stuff and Mike took Maria and Anthony to go get donuts, because the earth will spin off it's axis if we don't go to that damned Dunkin Donuts every week.  Anyways, they came and got the stuff and Anthony and I offed to the Harrison Center for the Arts, which is where the class is.  We went in and the woman there gave Anthony a nametag (with my last name, I said ha, everyone always said it would be a problem if I didn't change my name!) and then asked if we wanted to start with clay or paint and I said clay.

So.  We went in and the teacher was lovely.  We had some issues, Anthony's braces were bothering him, so I took them off, people always seem sort of surprised that Anthony isn't talking to them or answering their questions.  Damn you, Rainman!, I always think, ha!  Anyways, we made a bowl and I did a lot of it but I tried to do mostly hand over hand work with Antony.  I learned a few things while working with the clay portion of the class.  I should have brought gum because Anthony wanted to put a LOT of clay in his MOUTH.  The kid next to us, who seemed to have zero special needs, kept saying "ewwww!  He is putting that clay in his mouth!".  The teacher assured me it was non-toxic, but it was kind of clay-y and it was making kind of a gray mark around his mouth, ay yi yi.  Once I gave him the gum, it went better.  We moved from the table where we were rolling out the clay to the painting table and we (I) painted it, ahnd over hand with Anthony.  We had a finger print and stars theme, fyi.

The time really did kind of fly by and then we went to the painting part.  The teacher's name was Carrie and she was really nice, super normal and positive.  We were making a landscape and it really came out good but again, I did a lot of it.  So if you look at it from that perspective, I guess, it was kind of bad!  I am a terrible artist but the teacher taught us a lot of different ways to make the sky, the clouds, flowers, etc., using different mediums.  Anthony started to get upset about half way through, so we took a walk to the bathroom - I asked where the bathroom was and they directed me to the mens' room, so after a deep sigh, I just took him in there.  Thanks to God, it was just a regular bathroom with a stall and everything.  Anyways, when we got back I realized he didn't want to go to the bathroom but that he was thirsty.  He was drinking paint out of the little paper cups we were using to make the flowers.  SO the thing I learned in THAT class was that I should bring a bottle of water.

BUT I am happy we went and we will go again. There is no way on God's green EARTH that he can go on his own, but Mike or I can definitely take him and who knows, maybe it will get better every week.  As my nephew Parker always said, you never know. 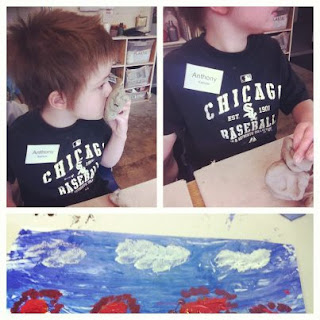 Yeah, Anthony AND Joanne; there will always be a Charlie. Love him anyway, maybe he'll learn something from Anthony.