Last night, Anthony had a seizure.  It was the same in some ways in that it was at the end of a long and rough day.  It didn't last long.  He slept a lot after.  But it was different in some other ways.  I think he was coming down the stairs when it happened, because before we knew it, he was at the bottom of the stairs, lying down.  He never lies down, but he had several times that day, which always makes me think, crap!, I should have known! Also he didn't throw up and he always throws up so I went looking for it and didn't find it, which is a weird thing to do.  He seemed to have a mark on his head and we thought, did he fall down the stairs? I was right in the kitchen, I never heard a loud noise.  It is a little too mysterious for me.

He has been doing this thing lately where he sort of bashes in to me and I hate it, I'm afraid he's going to knock me over.  But then he has a seizure and I think, does he know? Is he begging for help? I'm going to talk to his therapists about putting in some icons on his iPad for "I don't feel good" or "I have to lie down".  I don't know, it's not perfect but I want to do something.

Anyway, we are as usual plugging along.  I guess - I don't know, I feel like some days are so rough all we can do is maintain.  I feel bad when I feel grateful he has a seizure because I know that means he'll sleep well.  It's messed up but what can you do?  He has been doing very well at swimming and well at OT, he's doing well at Little Star, and we are working on it at home.  And now it's February which is closer to March and Spring! 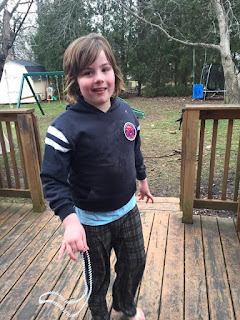