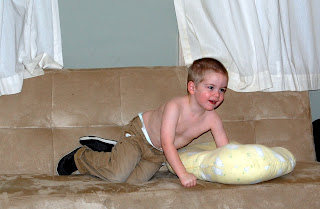 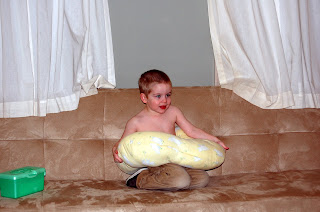 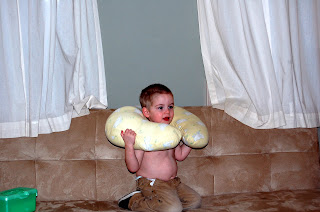 What a day we had today. I got a super nice note from Anthony's speech therapist, it was written right after their session together. She wrote right after because she wanted me to know right away how well he had done. He said her name, and she said he had never been more verbal or cooperative. I was so excited, I was crying reading the email to Mike on the phone. It's so nice to have some vindication for all this crap that we're doing with him! This afternoon, though, we went to a playgroup at a friend of mine's house and we had to leave right away when Anthony could not understand why he couldn't play with my friend's husband's super expensive guitar. Anthony, you may remember, LOVES him some musical instruments and I just can't communicate to him that some things aren't his. It was wretched, we were down in her basement so I had to drag them both upstairs, he was kicking and screaming and miserable. I really didn't feel like we could do anything but leave, but I wasn't mad at him or anything - it was just an impossible situation - I knew the minute I saw that guitar that it was going to be a problem but by then it was too late. He is fine now, but I still feel kind of wiped out. Ha, but I guess this blog isn't about me, right? :)