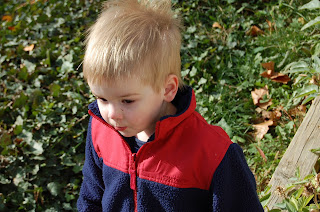 Oh he looks so awful today I can't post a picture of him. His nose and lips and cheeks are all red and beat up. This cold is wicked and I guess it's going to last forever? He slept well last night, I think, I was up with Maria at 3:30 and didn't hear him and then I was awake for like an hour after that and never heard him. I went to take Maria in her room around 7:00 and then I heard him, so hopefully he slept well. He went to school today because he just appears to have this runny nose but ugh - I feel really bad for him but I feel bad for us too, because we're the ones he keeps wiping his nose on.

He looks so tiny and young in this picture doesn't he? It occurs to me that last year on November 23 it was a really nice warm day! Not so this year. In fact, we wanted to take him outside yesterday but we were afraid it would make his cold worse. Today is rainy and crappy so we're inside again. He is eating okay, he's in the other room watching a Diego with Mike, who's home this week.
Posted by Joanne at 1:14 PM