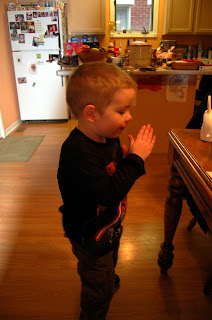 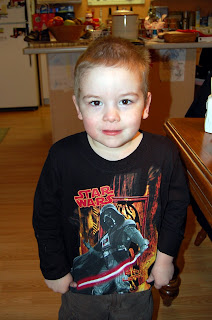 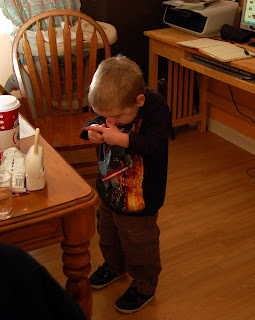 We bought him this Star Wars shirt last night when we ducked out after dinner to get some shopping done at Target. Ha, we didn't duck out and leave the kids alone, my parents stayed here after dinner, which was very nice of them considering they just got in from Florida yesterday afternoon. ANYWAY, we bought this shirt for Anthony and we also got him a giant thing of pretend food - we have been looking for one for a long time, I want to work with him on pretending to eat and work on his pretend play.

We got his evaluation back from the Autism Center Mike took him to in October. For a bunch of professionals, they are sloppy as hell. There were like fifteen mistakes on it that I had to correct, and not little mistakes but what I would think are big ones. Like they said that Mike said that Anthony was toe walking and hand flapping since 'early on', which is just not true. He never did that until right when we were getting him evaluated, and I think that's a big difference. Also they said Anthony had a nine year old sister! Ha! "I wish", I wrote in the correction, "but she was only nine months in October". Ninnies.