He is not much of a layer-arounder, I'll say that. He has been walking the backyard for a while now. He went to bed early last night and rose EARLY this morning, before 5:00 I guess. He was unhappy at first, I went in and covered him up and rubbed his back and he calmed down, but he didn't go to sleep, just knocked around in his room until Mike got him. He's had a few episodes already but right now he's good. Lord, he is a pain. If he wants apple juice, he gets up on the counter and gets the pitcher, then sloshes it in to wherever I'm sitting, juice flying everywhere. Then he'll have the TINIEST sip, 1/100th of what has already spilled, and - just ugh, it's apple juice, it's so sticky and gross. Anyways, he's fine. He had a good week, overall, I shouldn't complain.

Yesterday for home therapy we hung out for a while and then the girls woke up and we went to a garage sale. My friend was selling a double stroller and I want one so we all piled in the van in search of the sale. At first we went to the wrong house, but finally we found it. There was a dog at the second sale, and Amy patiently walked Anthony up the driveway so he could get near the dog. He's doing pretty well with it - he still doesn't like it and he will never hug you tighter than when there is a dog around, but mostly he was really brave about it. We went to McD's after and got some chicken and fries and a shake for Anthony and he did great, just great. Apparently, he got so mad about a lack of cookies last night that he kicked off a cabinet door in the kitchen, but except for THAT, he had a good day yesterday.

He is so much more tense than I would like to see him, I wish that he was my simple little happy boy but he's not, right now. I mean, he still is that boy, he's still in there, but he's just super grumpy sometimes. I am, too, and I used to be much nicer, so I know how he feels. Ha, and probably I know how my mother feels too! 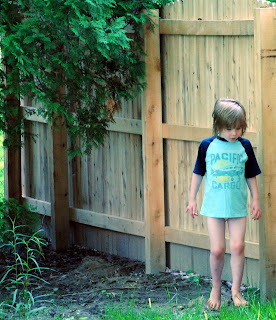 Hi Joanne! I feel your frustration and heartache. He is a handsome little boy! I know that you do not know me from Adam, but I was hoping to offer some thoughts to you, if that is ok. I have three boys on the spectrum and they have all been through or are doing ABA therapy in home. I swear by this therapy and truly believe that it has helped to make their transition into school so much better. There are so many different therapies out there, and no one is the best for any one child, but if you haven't looked into this kind of therapy yet, I would highly encourage you to. I will keep you and your family in my prayers and I hope that you are able to turn to a group of friends for support.