Ha, I thought he looked like Gulliver here but then a friend of mine on Facebook said her son rides his little brother's bike and calls it his clown bike, which seems more appropriate. That's the bike Maria got for her birthday, but we have already decided we'll get Anthony one - well, a bigger one, this spring, an early present for HIS SEVENTH birthday. SEVEN!

I don't even know what to say, it's all so repetitive and boring. He is doing well in school but not so much at home. He had a backslide on toilet training, he was even having accidents at school, so we chalked it up to after-effects from his Christmas break. Also, Mike and I have to be more tough on the weekends about following the exact right schedule and we had gotten kind of lazy about it. Mike has to do almost all of it, like 95%, because - well, because it's a habit we have fallen into, I guess, I am usually messing around with the baby, who lately wants only me.

He has been having kind of a rough time, tantrum-wise, too. It can be super disappointing, I try and not judge it but man- out of nowhere, he gets so mad/sad and there's nothing we can do. I've been doing a little work with him, his speech therapist sent home some cards for him to verbally label and I've been doing that, he seems to like it.

I read this week about this girl, Amelia. The short version is that she is being denied a life saving surgery because she is mentally retarded and the doctors that could do the surgery don't think her life is worth living. Honest to God, to think that I was once in a position where I would just read that and think, hmmm, what a shame. Now I read it and I start to cry, and my palms get all sweaty and I think my God, what would I do if it were Anthony? There are people that think that his life isn't worth as much as THEIR kids life because he has autism. Blech. It blows my tiny mind.


Anyway, here are, sometimes having tantrums, sometimes not making it (or seeming to care about) to the potty, and sometimes we are riding a clown bike in our pajamas. 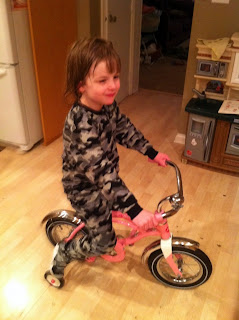 Love it, Joanne; I love every picture you post -- especially the ones where he looks happy, and he DOES look happy here!