I know this is blurry but I have to post it. He is rubbing her head! He loves her, deep down, and lately he's been into rubbing her head. We went to Mass today and I was holding her, cradling her, with her head facing where Anthony was and he rubbed her head and then WHACK, WHACK, WHACK, he sort of popped her in the head! HA! She didn't even blink, it wasn't hard but it freaked me out. She looks like him, to me, and maybe he recognizes his own. Or maybe he's getting more used to use bringing home a baby girl every two years or so, ha!

He has been doing well, I was telling ... either my mom or dad, I can't remember, that I feel like I hardly see him anymore. He leaves for school at 8:00 in the morning and I go get him at 4:30, we come home, have dinner, take baths and go to bed, basically. And sometimes he's not that pleasant just during those short periods of time! But mostly he is and we've had a good weekend, he's swimming again on Thursdays, which he really likes. He was very, VERY good in church today, we all six sat for almost the entire Mass! Mike and I barely looked at each other, we so didn't want to jinx it.

Oh, my friend Elvina, who I used to work with in New York, wrote this incredible piece about having another child after your first has special needs. She is a beautiful writer and I recommend her blog anyway, but this piece is just amazing. It really touches me. If anyone ever asked me how I dared to have more kids after having Anthony, and believe me, THEY HAVE, I always say the same thing - I love Anthony so much and he really has done more for me than he's taken away. YES he is exhausting but so is Maria! So is Veevsy Voo! So are they all, so was John (ha ha) to my parents! He is my first baby, I will never ever be the same after I had him, and then we had the chance to feel that feeling four times in our marriage? I - I don't get the problem. Yes, I was wracked with fear through the other pregnancies that I had. I suppose I am grateful that I have girls after Anthony because they are less likely to have autism. But that's just details. It's too much to talk about human beings like they are not complete miracles, I can't do it. I can't say, well we could have a non-special needs baby, so we'll RISK IT. Of course, we are just merrily having all the children that God gives us, but I feel lucky that I never had to really make a choice like that. I THINK I'd decide what we've decided, but who knows? Anyways, I thought it was a lovely piece and she's a great writer and I miss her a lot, so here it is if you want to read it, too. 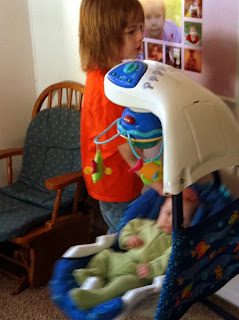 What a great picture! I'm so glad you were able to capture that brief moment =)!