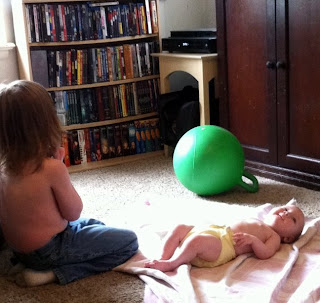 Here's Anthony with Felicity, the oldest and the youngest - so far!  Ha ha ha boo hoo, just kidding, she will probably remain the youngest.  Anyways, I wanted to post a link to this youtube clip of this nimrod talking at a Ted Talk in San Antonio.  She is the sister of a brother who has autism, and she is deeply, DEEPLY concerned not about him, but about her self and HER childhood and the fact that she was a GLASS CHILD, which is someone that the parents look right through, because, you see, they are so busy with their autistic child.

I don't agree with her assessment.  She seems determined to be adversely affected by her brother's life.  It makes me worried and sad, of course, that Maria or Veronica or Felicity would ever talk about their lives like this, but mostly I just don't think it would happen to them.  We really and truly love all four of our kids the same and we try hard to give them all what they need.  Maria, at this stage, is by far the neediest.  She is sitting directly to my left right now, drinking my coffee, insisting that she likes it and it's not too hot!  Sheesh!

But Felicity is pretty needy, too.  She is a baby and she's been so sick that she's needed more time from me and Mike.  Veronica is kind of a needy person too, because guess why?  THEY ARE ALL LITTLE CHILDREN!  Maybe it will get worse later, but I think if we start with loving them and attending to their needs, I don't see where we can go wrong.

This really makes me think about our lives with Anthony and how lucky we are to have a school for him to go to.  It's hard - yesterday we were at the ER with Felicity and the doctor asked her what grade her brother was in and Maria sort of stumbled, and I said, leading her, Anthony has autism and goes to a special school, and she repeated it.  If we didn't live here, if we couldn't afford his insurance or school, I guess he'd just go to our public school.  Then he'd still be in a different school than they are in, but he wouldn't have as long a day, he'd have more holidays off, he'd be around more.  I don't know if that's worse or better for him OR them but I think he seems happier at school. focused on his work.

This is scattered,I want to post more for Autism Awareness Month but man.  Maria is talking incessantly to me and I can't even think anymore.  At least I am free of the fear that she is a glass frickety fracken child.