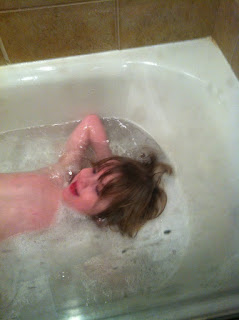 I always have a moment of doubt when I put up a picture of anyone in the bath.  I think, is anything showing?  I don't think it is, but I always, always have a second where I worry.

Autism Awareness.  UGH.  I am AWARE!  I'm amazed at how many people aren't, I guess, considering that the CDC just came out with new numbers that say that 1 in 88 babies born will have it. Is that right?  Or I guess is that kids have it now, that's it.  Because there is a big controversy about why the numbers have gone up.  Some people believe it's an EPIDEMIC because the world is poisoning our kids and some people think only diagnoses have gone up.  I am kind of with the latter group, because here's why:  the group that had the biggest rise in numbers is hispanics, and I think that speaks to diagnosis, right?  They're doing a lot more checking for autism in schools, the average age of diagnosis is like eight or something, so it seems to me that what we're dealing with is a rise in diagnosis.  If you ask me, people have always been complete wierdos and it explains a lot that many of them were on the autism spectrum this whole time.

But this is not Anthony's autism.  Anthony's autism is .. autismier than a child's autism when they were diagnosed at eight.  When they got through preschool and Kindergarten and the first few grades.  When they are toilet trained.  When they have an interest in something, anything.  Anthony is, I guess, severly autistic.  He is LOW FUNCTIONING, as people love to talk about.  It makes me so, so sad to type this, because - well, because of two things.  One, it's Monday and we are so tired and wrung out after the weekend, it's hard to be a hopeful person.  And two, sometimes it feels like because he is low functioning and severely autistic NOW that that's how he's always going to be.  I don't feel that way all the time, but if I'm forced to put a name on it, and a feeling on it, that feeling is sometimes hopeless.

My mom posted a thing the other day on Facebok about how much autistic people cost society and a friend of hers posted "This makes me so grateful".  I was like, uh, what in the who now?  I wanted to post and say "this makes me ... ungrateful?".  What the hell?  I don't really like reading articles about how much people like Anthony *cost society* because that seems like ammunition or something for why they shouldn't exist.  It seems kind of Nazi-ish, to me.  I mean, I know it's not, but man.  Lots of people cost society lots of money, not just people with autism, so I kind of resent putting a number on it.  The idea, of course, is that people like Anthony won't ADD anything to society and I say that's not true.  First of all, who knows?  Anthony could grow up and cure cancer, what the hell do we know?  I hardly think six years old is the time to make a decision about someone's whole future.  Secondly, Anthony goes to school every day where someone is EMPLOYED to work with him.  He has BAZILLIONS of insurance claims every damned month and someone has to process those, that's another person employed because of Anthony and kids like him.  He's getting billion dollar orthotics here soon, that's ANOTHER person working!  Anthony Beck for President!  Ha!

Anyways, I am aware of autism every ding dang day.  Maria just asked me what I was doing and I said typing about Anthony.  She said "you're typing about his words, because he's doing really great?".  I daresay Anthony is adding to Maria's little society, too.  So shut it, naysayers.

I kind of love everything about you right now.