This picture is a few weeks old, Mike took it one day while they were out in the driveway. My phone is broken and I have to take it in to get fixed, so I moved all the pictures off of it, including this one. I love his hair so much, I was thinking about cutting it the other day and I just can't do it. I don't know what we'll do - we can't keep growing it and growing it but I don't know if I want to buzz cut it, either. Those are our only options right now, so I guess I wil just put it out of my mind and we'll figure out something else later. Maybe something will come to me in a dream. I just cut off all my hair, so maybe that's enough.

He had a good week, toilet training wise, but a bad week, tantrum wise. I suppose it is always going to be something. He didn't have to do any "work" at school the week that he was toilet training full-time, and he had exactly NO behaviors. So ... the message is, he doesn't want to do any work? That would be a bummer because he has to. I'm hoping it's just a settling-in thing, that maybe THIS coming week, he'll do well with toilet training AND not have a million tatrums.

He went to the Fair this week. Also, a miniature horse came (not on its own, ha) to his school, but I guess he had no interest. His speech therapist mentioned he said NO! really well several times while the horse was there. When he went riding this summer at camp, they said he was scared at first but then he enjoyed being up on the horse. I guess this was just a horse to pet, though, which to Anthony might not be any different than a giant dog, and um, I can see why he didn't like it.

He also went on the Fair train, so that's his first train ride. I wish we had a picture of all these things! I am not a person who is ever all, "oh poor me, what can I do, my child is going to school!", but I can see how it's frustrating and hard to not have them with you all the time, after so much time when you can just take their picture whenever you want, and do whatever you want. I remember when Anthony was going to school a few years ago and I was so surprised at how well he did, following directions. Mike said well, they're putting on the yoke, you know, this is life, you do what everyone tells you, etc. It's so depressing! Maybe that's what people mean when they get all sad about their kids going to Kindergarten? I seriously can't see another reason - what is the alternative? They just stay at home forever? I don't get it.


Anyways, back to Anthony. Here on Saturday morning, he is sleeping, still, at 8:33! This is almost 12 hours after he went to sleep but Mike and I both thought we heard him around 5:30 so maybe he was up for a while this morning. I hope and pray we have a good weekend, I feel like he is due a good weekend, or even just one day. 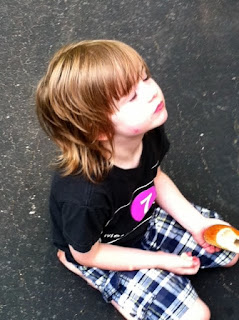