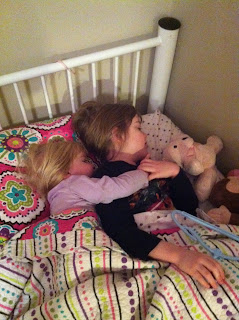 Anthony LOVES Maria's bed. I don't know if it's because it's up the highest of all the kids' beds or what but he loves to go in there. This is from the other morning before school, He was in there and Veronica climbed right up and I was snapping away with my phone, since they rarely appear together. I think they look so much alike here, their profiles are almost identical, to me. In the interest of full disclosure, I think he was grabbing her hand to *get rid of it*, but maybe not. We'll go with the picture, right, and say it looks like they are holding hands? Okay.

This morning Mike took the kids to get donuts (and bagels and coffees and juice, according to Maria) and Maria seemed unnerved about going. Mike has been taking all three kids in, since Maria LOVES to 'get down', and I guess it's been a little crazy at times. One time Anthony touched some older dude's beard - it's something they were working on at school. Anthony can go up to a male therapist at school and say 'beard', and then he can touch the guy's beard. Welllll, apparently, the guy at Dunkin Donuts wasn't in on this particular part of Anthony's therapy, so I guess he was surprised when Anthony reached out and touched his beard. Sometimes he takes his shoes off, last week he jumped up on a chair to jump down, etc. I guess people's reactions are such that Maria is noticing them and thinking they are strange behaviors.

I told her this morning, look - you can go get donuts and the women behind the counter will give you a donut hole, and they'll be happy to see all of you! Don't worry about what people think if Anthony jumps around or hoots and hollers - we all love Anthony and those people at the store will too. (Note: this is probably not true, Mike said the old ladies that Anthony went and stood near last weekend were distinctly grumpy about it but I don't care. Old people have their problems too, and they are probably worried that Anthony is going to knock them over or something. I see it in church, too.) Anyways, she went and I think she feels better about it, but man. I hate that her love and admiration for Anthony is getting all funkified because of some a-holes in the store. I did take the opportunity to tell her that if SHE behaved herself and held hands with Veronica, maybe DADDY could focus on holding Anthony's hand. We'll see how it goes.

Anthony has had a pretty good week. He started with a new afternoon therapist, which is great because it makes for less tension in MY life, which is selfish but true. He has been doing pretty good with the toilet training. We are not at 100% but we're probably at 75% and that's good. I read one blog of a woman whose son is a teenager and she said the other day (they live in NJ) that they were stuck in horrible traffic and her son asked to go to the bathroom. She said it wasn't too long ago that they would have had to pack a bunch of extra clothes and expect an accident on a trip like that and I thought, well, okay, then. Clearly, this is a goal that can be accomplished and now we are part of the population that is WORKING toward a GOAL and having some SUCCESS. That is a better place for us to be than when we were NOT working toward ANYTHING.

He is doing very well with his iPad. I am not a person who is WEEPING and CRYING over Steve Jobs' death, although I am always sad when a person who is so young dies of cancer, especially pancreatic cancer. I have a friend from high school whose husband died very young of it and she has really opened my eyes to how underfunded research is on this type of cancer, one of the deadliest. Anyways, I am not crying at the Apple store, but I did make a post on Twitter about how my son can now POINT at something and expect a result and that is all because of the iPad. That is truly a miracle in our time and I think it's going to make a big difference in his life and for that I am grateful.

What else. We are going to a pumpkin patch/apple picking today. We went out to dinner this week for my mom's 70th birthday and it was really, really fun. Anthony had not one but TWO accidents while we were there which wasn't as big a deal as you'd think. We changed him after one and brought him home after the other. I don't know what happened, he had peed a lot before we left so we thought we'd be okay. We decided we are going to use pull ups for situations like this in the future, why not try to have success where we can? He is so insensitive to stuff like this, I don't think he'll 'feel' the pull up like a typical kid could, and it means we can have an hour where he doesn't have to get all wet, why not? We're going to use one today at the orchard, too, it would be too crazy otherwise.

He is still getting kind of crazy before he goes to sleep. But, you know, the girls are too, maybe it's the time of year or the waxing and waning of the moon, who the hell knows. I am trying not to grade every day. Today is the last Saturday of Anthony's life before he has THREE little siblings, so we're going to try and have fun. Wish me luck on Monday and think of me and our next little baby!
Posted by Joanne at 9:02 AM

Can you email me and tell me what apps work best with your son on the ipad? I just bought one. Thanks!

No pic on the post? The sibling stuff is tough... Wishing you an easy delivery on baby # 4!

Thanks for pointing it out about the picture!

And such a cute pic it is!

GOOD LUCK ON MONDAY!!! So exciting!