If you look closely, you can see there are three of them in this picture. Poor Veronica is down in the right corner. It must say something about my level of exhaustion that it took me a long time to realize what was up and down and right and left in that picture. Sheesh.

Anthony is not having a great time of it here at home lately! He has been freaking out at night, and sometimes during the afternoon, and mostly ignoring all toilet training that we've done. It's beyond disappointing. It's like, if one thing was going well, we could at least point to that, but it's not, really, nothing. Allegedly he is doing well at school but ... who cares? Ha! I mean, I care, of course, I'm glad he's doing well most of the time, I just feel like ... well, he LIVES here. I wish he could be happier and more successful here and I have all these ANGER feelings of ABANDONMENT with regard to the toilet training here and how screwed he got on the home training and .. ugh. We are going to continue to plug away and face each day and new pair of underwear with a smile and hope it gets better. And I'm going to make voo doo dolls of people to play with in the middle of the night when I am up nursing and I'll get my aggression out that way, ha!

Maria, as pictured, follows him everywhere lately. He doesn't seem to love it but he doesn't seem to hate it either. I mean, I think ideally he'd want to be left alone but she is hard to resist. She loves him so much, it breaks my heart to see it.

We are coming up on our second weekend where we're all here, I hope and pray it goes better than last weekend! Anthony was supposed to go on a field trip to a pumpkin patch this week but it was postponed, we have had some crappy and cold and rainy weather. I think it's supposed to be clear this weekend, so maybe we'll go back to the pumpkin patch. We'll see. I haven't taken the baby anywhere yet but that is all outside and she'd just be in the wrap anyway so I think she'd be okay. Speaking of the baby, she is starting to scream in earnest so I have to move around again. Later! 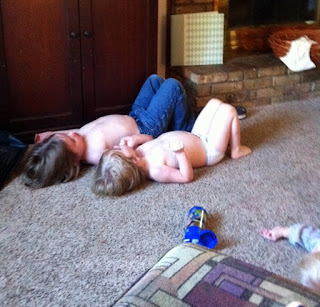