Today was a pretty good day for Anthony - he didn't have to go to church because he slept in, AND he got to go to Mike's mom's house for a visit.  Ha, he is funny, though.  Mike told me that he saw a cat in the driveway when he was still in the van and after that he was all, "okay, I'll be staying RIGHT HERE".  Mike eventually carried him in and he was fine, but Anthony is not a fan of the feline.

He has gone for FOUR WEEKS IN A ROW AT SCHOOL WITH NOOOOOO ACCIDENTS.

He's doing okay here, it's not as good, obviously, but he is doing okay.  We at least have expectations here and he knows it, or I think he knows it and we are moving forward.  He was dry all day today when Mike took him to the bathroom and that includes two long trips in the car.  So, that's good right? 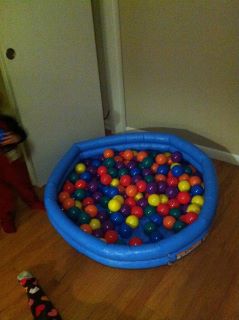 I made him a ball pit for Christmas but I gave it to him already.  The problem is that he throws every damned ball out and it drives me mad.  PLUS he likes to lie down in it so why throw it all out?  I've looked online for clues and it looks like maybe others have had more success with MORE balls, so I'm getting more.  It was incredibly cheap, like $4 for the pool, $8 for 100 balls.  I just have to make it work, as my friend Tim Gunn would say.  I keep it in his room so a) it's his and b) all those damned balls are contained to a room anyway.  Sometimes I put them back and I put all the blue ones, then the yellow, then the red,  and I think who has autism here anyways?  Ha!

He's back to school tomorrow, he'll be off for a week between Christmas and New Year's but Mike will be home too.  Maybe we'll be able to do something fun.  I'd love to take him to a bounce place or something, I know how much he loves it but they are so super crowded when everyone's on break.  We could try it, I suppose. I'm scared just thinking about it, actually.

So.  Tomorrow we are off to another week, God knows what will happen but I hope it's good.  I am trying to be more optimistic during this Advent season and - well, I just started today, but I'm hopeful.  The priest in church Saturday night gives us small assignments each week of advent and this week he said be on the lookout for sin.  He said at this time of year more than ever, we should be kind and NOT sin but there we are, cutting people off and getting all crazy from the shopping.  Good point, I thought, and I am going to try to have TRUE Christmas spirit and think of the Baby Jesus as I think of my babies.  Although I always have to think, that Baby Jesus looked like He was a good baby, didn't he?  HE wouldn't throw those balls all over that manger, ha!
Posted by Joanne at 9:46 PM

Central Indiana Life Chain said...
This comment has been removed by a blog administrator.
10:22 PM

Wow; good news from school; hope it will soon be at home too. Accentuate the positive! Go, Anthony.