There are Crappy Parts, too. LOTS of them. 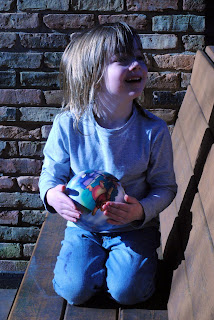 In the interest of fairness, I feel like I should say the Ten Things that are CRAPPY about Autism, too. I felt like a big fake and phony when people said such nice things about my last post. I meant the things that I said sincerely, but I ... I just - I mean, I don't feel that way all the time! I ASPIRE to feel that way all the time. I do lose my temper and I do say crappy things and I do lose faith. But that post was about what brings me joy from Anthony and from the fact that he has autism and that's what I wrote. But here's the crap:

1. Well, there's the crap, of course. And by that I mean poop. And by that I mean SIX LONG YEARS of changing diapers. We have made such wonderful progress with toilet training, but I could tell you some stories about what we have cleaned up in this house that would curl your toes. So I won't. But man, we have cleaned up a lot of poop in our life with Anthony and that just sucks. There's no two ways about it! Thank God for buckets of soapy water and scrub brushes, is all I'll say about that.

2. It's lonely - it's worrisome that Anthony doesn't love me, or whatever, just because he doesn't say it. It bothers me that I can't just fix his mood like I used to be able to. When he was little and screaming, I could wrap him tightly in a blanket and rock him and put on his blow dryer cd, and he'd calm down. Those days are over and I never thought I'd say them but I miss them. I miss that, anyway, that ability to make it better.

3. It can be embarassing. I'm such a crier, SO horrible a crier and as I've said, I cry at meetings and stuff, or, like, when that mom apologized for her son saying something about Anthony wearing a swim diaper. I know lots of autism moms who cry at their kid's IEP meeting, so I'm definitely not alone. I just wish I were TOUGHER about things.

4. I feel out of control, a lot of the time. I sometimes worry, when Anthony is having a tantrum, about what will I do when he gets bigger? Is he going to beat me up, like in some stories I've read? It doesn't *seem* like that will happen but I worry anyway.

5. I worry about Anthony and God. I know that God loves Anthony, even though I do sometimes get DISCOURAGED at the MYSTERY involved. But I wish that he could be getting ready for Communion, that he understood any of it. Religion is an important part of our lives. We went to Mass on Christmas Eve (we go every week, of course, not like THOUSANDS of people we saw at that Mass, ahem), and we took Maria. I guess they've been working on Away in a Manger at school and she sang it, LOUDLY, like she does everything, and it was so, so sweet. Her voice is really cute and it was just adorable. And my friend Carlos' kids, boys, were both involved in the Mass, and it made me really wistful and jealous.

6. I wish I were normal! I wish I could just know that I was going to raise up my kids and then they were going to turn whatever age, and go to college or whatever and then get the hell out of my house. It's not likely that that's going to happen with Anthony and while I would never wish for anything different in reality, in the abstract, it's just ... not what we expected. I'm so OLD, I worry all the time about what would happen to him if anything happened to us.

7. Um. Believe it or not, I'm having trouble thinking of 10! Let's see. He's noisy, there's no denying it. It can be a problem - we can't go to church and sit there the whole time because he's noisy. We can't go to places that it's unacceptable to have such a noisy person there, like the library. And if we DO go somewhere where someone could make noise, people give us funny looks, which sucks. It doesn't MATTER, in the grand scheme of things, but it isn't pleasant.

8. I am constantly reading stories about people with autism being mistreated or killed. This is incredibly upsetting, which probably goes without saying.

9. I find it so, so disheartening when I think I am going to read a book or an article or a blog post about someone with autism and I will relate to it. Then I read it and it's about the problems someone has with autism like they talk too much about a certain subject, or that they are having trouble in their mainstream school. Or they won't shut up. Or or or ANYTHING that is NOTHING like what we worry about. Then I feel bad, because I know that those problems are very real to the people who have them. It's just - I feel like no one has autism like Anthony has autism. And I hate it when people ask me if he's "high functioning". Did I ever say, I have a friend who asked me if Anthony was high or low-functioning and then she told me a friend of hers had a son who was really low functioning and then she *kind of made sounds like this kid makes*. And she *waved her hands around*. I mean, what do you do? Do I really kick her ass at a playgroup? Do I cry? These things occurred to me to do. But I just said he was non-verbal, which I think most people take to mean low functioning, but I didn't think of him like that. And I told her that he did wave his hands around. As I said, disheartening.

10. TEN! I made it! I constantly and I mean CONSTANTLY worry that I am not trying hard enough with Anthony. Because the thing is, no matter how hard I try, in some ways, it's not enough. It takes a team of us to help Anthony in all the ways that he needs to be treated. I am not a speech therapist, I am not an occupational therapist, I'm not even a teacher! So it's hard for me to know that I'm doing everything I can for him. I always thought of myself as a person who could fix anything. It used to be my b.s. answer at interviews about what was my weakness. I'd answer, honestly, that I had a hard time letting things go until they were fixed. I am the kind of person who truly enjoys doing ironing, polishing silverware. I love when things are a big mess and then I can just DO SOMETHING and they can be fixed, better. As Carrie Fisher says, I believe instant gratification takes tooooo long. So it's crappy that I have to wait so long to see such minute progress. But it is teaching me patience, I guess, and what else can I do? This is our situation. You can't pick your baby, my mom used to tell me, and she's right. If I COULD pick an Anthony, I'd pick the one I have anyways.