This past Saturday, which feels like about nineteen years ago, Anthony slept in super late.  We had to wake him up when Christina got here and that's at 10:00!  I think we just think that if he is tired and needs to sleep, he should, so we try and keep everyone quiet and don't bug him.  But then on Sunday night, he was awake until 2:00 a.m., then around midnight every night until last night, when mercifully, he fell asleep early, like before 10:00.

He had such a rough week.  He was pretty good after school/before Mike gets home, and he was pretty good at OT, but he had some rough times at school and he was really terrible to us at night.  He is doing this thing where he pulls his pull up away when he pees at night and so he gets really wet and we have to change him into new pajamas and a new pull up and then while we are doing that, he kicks and pulls and laughs crazily.  It's awful.  It's so bad that once I do it, change him and I'm all sweaty and exhausted and doubting EVERYTHING, that I can't sleep forever so we have both been really tired this week.  I went to sleep early last night too so I think today is going to be a better day for both of us.

He took off his clothes this week in PE, at school, and he has been taking off his bathing suit at swimming.  He used to take off his clothes a LOT, but he had stopped and now he's starting again and I'm super afraid that it's because he is regressing.  Daily, he is pooping NOT in the potty - well, that's not true.  I think one day he did actually go on the toilet but every other day this week it's gone pretty badly, involving much cleanup and gnashing of teeth.

I hate that every day ends so badly.  It's bad with him and then it's bad with the girls too, Felicity isn't tired because she's had a nap at preschool and so she terrorizes the girls, everyone is crying, Anthony is SCREAMING.  He rushes at his door and SCREAMS, loudly and urgently, and I think boy this is a real loony bin.  And it's like 8:00 and we still have to have dinner and clean the house and get ready for the next day.  We watch one show and it's time for bed and I find it very difficult to go to sleep with Anthony SCREAMING in the next room, ay yi yi, it's too much!

So tomorrow we are going to try to get him up at no later than 8:00 and see if he doesn't sleep better next week.  Back to the drawing board we go, I guess.  Things are going great with Christina, to look on the sunny side, he is going to the company picnic of his respite care place tomorrow, and I think things are going okay at school, despite some problems.  His teacher seems to really love him and I think he is getting used to it.  Here's a picture! 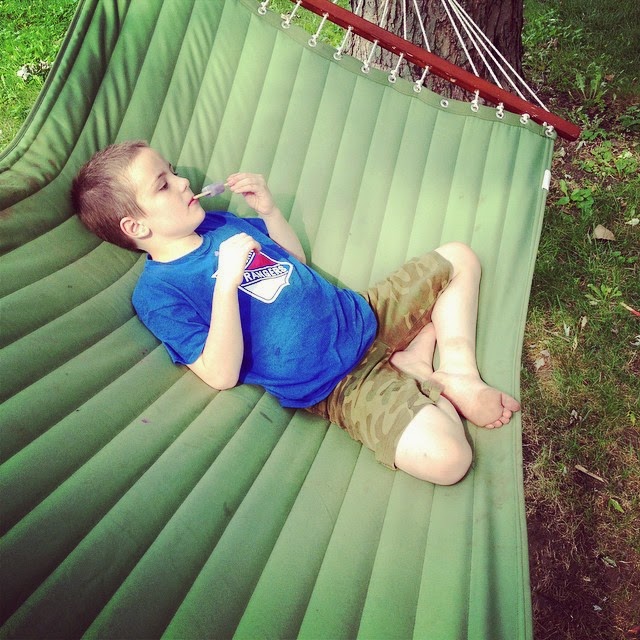 Prayers and hugs to all of you. If you want to "run away from home" anytime, c'mon down :) or I'll kidnap you, whichever! no, seriously...I'm sorry it's so tough. He looks so peaceful and just gorgeous in that hammock :) You have such a beautiful, loving, strong family. Always here for you..wish I could do more. Love and miss you all so much! God Bless~~ xoxoxoxoxo