All my bags are packed

Ha, ha, I mean the bags under my eyes, good God! I told Mike, I always have this idea of how I look in my head and then I see pictures and it's all blown to hell. Oh well, I suppose my vanity is less important than having some pictures of me with these kids. Especially this big baby, who crawled up into my lap today and snuggled under the blanket I had on my legs. Isn't he something? He is having a rough morning, I hate to say, but it's true.

He's been sleeping in on the weekends which was great, because it gave him a chance to catch up from the week but no more! He was up before 7:00 today and Laura, who babysat last night, said he was quiet around 10:00, so that's not great. It's also not terrible, I try to be mindful of the fact that there are other kids his age with autism (and NOT with autism) who sleep less than that. But he got so, so mad this morning, his tantrum lasted 22 minutes, which feels long as hell, trust me. He is doing better now.

We ordered his iPad today, I am so excited. We should have it in a few weeks.

So - there you have it, that's what Saturday looks like around here. It's not pretty, but I have to record it. Ha! 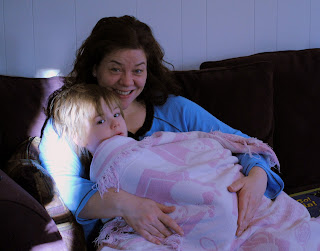 When I saw this picture of you I thought you looked great! Very pretty and happy:) Anthony is adorable of course too