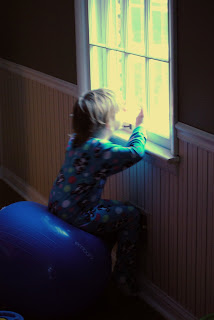 I wonder what people going by think, when they look in and see this giant boy, bouncing up and down. I couldn't get a good picture of him because it's kind of dark in the dining room but I love to record when he is happy and he was happy here. He has actually had a pretty good day, which followed a terrible, TERRIBLE day and night. They called yesterday from his school and said he had a fever, then when I went to get him, his afternoon therapist told me his temp was almost 102 and he was shaking. She also said he had fallen asleep, which of course never happens.

When we got home, he hung out in the car for a long time and then we finally got him to come inside and he slept on the couch until Mike carried him up to his bed, where he slept until almost 11:00. Coincidentally, 11:00 was when we were going to sleep and then he or Maria or Veronica was up all night, literally all night. It was terrible, poor Anthony wouldn't take any Tylenol and he was burning, BURNING up. He won't take any, he spits it out, I don't know what to do. I suppose we could treat him like a dog and hold his mouth closed but it freaks me out to do that. Thanks to God, he was cooler when he woke up this morning and he let me put him in the bath, which really seemed to help. I got us all dressed (Mike had taken Maria to school and was hanging out down there) and Anthony napped a little more, then when he woke up he had some crackers and juice and slowly came back to his normal self. He just went up to bed and I assume he'll be up until 10 or 11 like usual, and tired tomorrow, but healthy and back on schedule. It was beautiful here today, so he was able to get some fresh air. He probably would have preferred to sit in that damned van all day but we forced him to go outside, ha! I swung him on the swing for a while and he just knocked around.

It felt like my heart was breaking last night when I couldn't make him better, it's so terrible. I feel like I am supposed to take care of him, I am always telling him he's safe with me and then there I was, NOT able to do anything and in fact getting kind of short tempered and mad that he wouldn't just TAKE the stupid TYLENOL already. But things are better now and hopefully it's all a memory. His iPad ships on April 7, I learned today. I had to look at it because there was a charge for like $80 on my credit card bill. Apparently, Apple charges you for the warranty before the thing ships. Is there anyone in business that isn't a giant scumbag anymore? Anyone?