I read this blog entry today and I think it's interesting.  Does it make it easier for kids with Autism that you can't really see that they are not typical?  I remember at Anthony's first case conference at his school, the one where they diagnosed him with Autism, one of the people on the committee or whatever, said to me "he's so beautiful.  I bet that makes it hard, when he acts out and people think he's just being 'bad''.  It was the first time I thought about it, but I think it does make it hard.

I was reading this thing the other day on some mom's board about toilet training.  Some woman said that she and her husband were *laughing* at this mom and her child, who was "about three" in the woman's estimation, and the mom was changing the kid's diaper.  The poster couldn't BELIEVE someone was three and not toilet trained!  I was so mad at this person, I mean, all I could think is I wonder what she would think of me if she saw me changing Anthony's diaper, or if she saw his diaper peeking out from his jeans.  And then I thought well, if she and her husband laughed at him and I saw it, I'd have to kill them and then I'd go to jail and then maybe finally I could get some rest.  Ha!  Kidding!  But really, I mean, who do you think you are?, I want to say.  How can you judge people like that?

I am a judger, by nature, but I have really tried to curb it.  Even before Anthony was diagnosed, even when he was just little and crazy, I was so appreciative when people wouldn't stare at us or worse, say something.  I remember one time at Target, he was flipping out and I sat down on a bench so I could nurse him and some cracker ass woman walking by said, "Ewwww!" to her daughter.  And I mean, I wasn't doing it because I LOVED exposing my boobs to the Target and everyone in it!  I was trying calm my crazy baby!

Anyways, no I do not think it makes it easier that Anthony is gorgeous and looks 'normal', whatever that is.  I suppose it might seem that way, but the thing is, he could have horns sticking out of his head and he'd still be perfect and gorgeous to me.  I think that the 'well-meaning' grandmother referred to in the story isn't thinking it through - of course your children are perfect looking, to you.  And if you don't care what other people think about how your kids look (and why would you?), then no it doesn't make it easier that Anthony isn't in a wheelchair, or his eyes aren't crossed, or whatever.  I do think Anthony and my other kids are super cute but I could be wrong, I suppose.  I am blinded by love.  p.s. I do not think I am wrong.  Look at him! 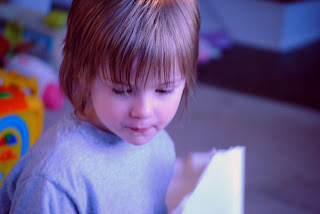 You aren't wrong. He is gorgeous!

He's gorgeous! And so are the other two:) I love how you write about Anthony!