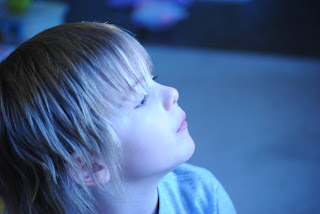 Well, Mom, in answer to your question, we are having the fence installed next Friday.  I'm SUPER excited, in my imagination, I picture the weather getting good that day and just staying good ... forever.  We got a six foot privacy fence, with a gate going to the back deck and door and another gate on the other side of the house, actually a double gate, so it can fit the riding lawn mower.  We got our fence from Amerifence and I have been really impressed so far.  I got three quotes from three different places and the guy who we worked with from Amerifence was beyond nice and professional.  I told him that we had to get a privacy fence because my son had autism and I was concerned about him climbing a chain link fence - or maybe attempting to climb a chain link fence.  As soon as I said that, he just started looking for ways to make it easier on us and I - I can't tell you what it means to me, for someone to just be nice and decent and kind, especially when it comes to Anthony.  You hear so many stories about TERRIBLE things happening to kids with autism, being bullied, misunderstood, not given the things they need in school, being restrained or hurt, on and on and it can be so depressing.  I'm telling you, this guy is lucky I didn't break down CRYING or HUG him or something when he was so nice.  So.  That's new, the fence.

Also, I don't know how much anyone cares about this, but the new iPads are here, the new iPads are here!  This means that the new (supercool) iPads are the same price as it used to be for the now old ones.  SO we can either get an old one, and maybe use the money on more apps for Anthony, or we could just go ahead and get the new one and then he'll have the newest.  It's really thin, it's thinner than Mike's iPhone and that's thin, baby.  We're going to order it this week and we're already working with some of his therapists on it.  Here's a good article on the success one boy found with the iPad and I don't want to get my hopes up, ever, but I just wish that it would be a positive thing for us, however that is.

Also, Anthony is swimming away, we'll go tomorrow night again. I forget if I said but he's signing up for another session.  We can just keep going from now until doomsday and I think we're going to.  I can see him making progress every week.

His hair is getting SUPER awesome.  All three of our kids have cowlicks in the back of their hair and they make the problem worse by rubbing the back of their heads on their carseats, or wherever they're sitting.  So we have been struggling with knots in all their hair.  Anthony hates to have his hair combed or brushed, BUT I bought a new shampoo and a good comb and it seems like I can get it under control.  I hate to have to cut it - both because we HATE to have to cut it and make him so miserable, even if it's just for a little while, and also because look at it!  Coolest hair ever!  Number One Hair!  :)
Posted by Joanne at 6:28 PM