Anthony's old therapist Pam told me at Christmas time that he liked these Search and Find books.  At his school, they have a GIANT one, it must be 2 by 3 feet!  I tried to find him some for Christmas, my sister found these big ones at Home Shopping Network but they are not board books, so there has been some ripping.  I have taped the HECK out of them by this point. 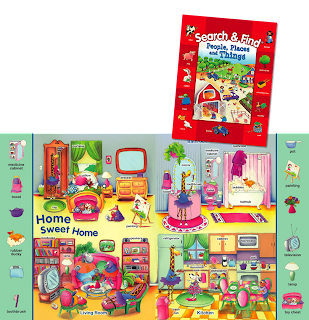 So.  Enter my brother Larry and his family.  They gave the kids Barnes & Noble gift cards for Christmas and yesterday I took Anthony on a little outing, just the two of us, and we bought some new books.  I bought books like these, mostly.  I bought one about People, Places, and Things, one about Places to Go, and ... another one. For the girls, I bought an Elmo one (Veronica) and a Princess one (Maria).  I figure they'll all like the seek and find-ness of it.  Anthony really seems to like them.  His favorite animal is the pig and he loves when I make a pig sound right in his ear.  Unfortunately, I have a bad cold right now and it sort of makes me sick to do it, but I have to persist, he loves it so.

Last night, he was super tired and he got *very* upset before he fell asleep kind of early, I guess around 8:30 or so.  Mike and I went to bed early because we figured he'd be up early.  Veronica woke up at 3:20, though, and we let her cry for a while but we were worried she'd wake up Anthony so I got her for an hour or so and then Anthony DID wake up around 4:00.  Meanwhile, Veronica was up until like 4:45 or something and went back to bed, but Anthony never did.  It's an insane asylum around here, sleep-wise.  Otherwise, too, actually, ha!
Posted by Joanne at 11:55 AM

These books look great; glad everyone seems to like them so well.

I got some puzzles and games for them today for Easter -- got to start shopping.