Mike took him swimming tonight - through a series of early wakings and non nappings, I am exhausted and I didn't want to drive Anthony to swimming, so Mike took him. We should probably trade off anyway, so he's used to going with either of us. Anthony is not a person who is really hung up on routine like that, but we may as well try to avoid it where we can. Plus it's super fun to watch him have such a good time. For some reason, his lesson was only 30 minutes instead of 45 tonight, I'm not sure why, but that's probably enough for him anyway. He had another good day today. I can't even really talk about it, I can't stand to think that we might be free of these tantrums. I mean, not even completely free but just to be given a break like this feels like an unbelievable miracle.

Ooh, he is driving me batty in other ways, though. He takes EVERYTHING out of the silverware drawer. It's ... it's insane, I told Mike tonight, I was thinking of where I could keep all the stuf in the cabinets and drawers but the fact is, I have to keep the stuff that's in there IN THERE. I just hope to keep telling him no and redirecting him and maybe someday he'll get it. Of course, both his sisters do the same thing so several times a day, it feels like, I take everything that's been in every cabinet and drawer and put it back. Maddening. Also, tonight, not to talk to much crap about him, he went upstairs and ran the water in the bathroom sink, that he was SITTING in, and the water ran everywhere, quite a bit of it. It took about 12 towels to clean it up. Sheesh. I try to think of it as an adventure and a lesson but man. It's tiring. 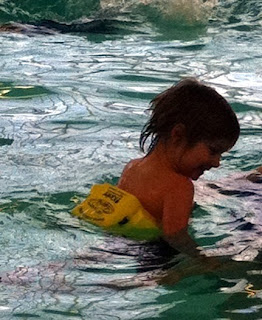