Anthony is off to swimming, his second Saturday.  I think it's better to go on Saturdays.  He has been waking up kind of rough lately, and it's nice to have somewhere to go, especially somewhere he really likes going.

We had a tough, TOUGH week.  I wish I could report better news on his blog, but I have to go with the truth.  He woke up at 4:00, 3:00, 2:00, 11:00 (pm) and some other ridiculous time this week, and he's been mid-tantrum when he wakes up, so it's very upsetting to him and takes him a long time to calm down.  Mike has been working, the girls have had their regular schedule, so we are both really tired and finding it hard to cope with our regular lives.  Some verrrrry disappointing things have been having at Anthony's school, too, so it's been a very tough week. 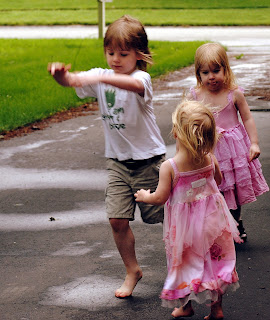 BUT he went to the splash park yesterday and I heard he had a very good time.  I was worried he wouldn't be able to go because there was a chance of rain, but it stayed nice and off they went.  Also, his afternoons have been okay.  We got his swing installed and although it's not perfect yet, he really likes it and that makes us all happy.  I'm trying to think of other positives.  His hair is looking excellent.

The things that have gone down this week at his school have been painful, for sure, but there is a certain freedom in finding out who people really are.  Mike and I have been sort of blindly going along for a while here, even though we've been unhappy with this or that, we have tried to maintain some sort of status quo for Anthony and hoped that things would get better.  But if we're honest, we have to say that it's not really getting better for Anthony.  I look back through the last year and it's been tantrum, tantrum, lack of sleep, tantrum, misery, tantrum, tantrum.  That's not making a judgment on it, it's just how it's been.   I am at a point where I am almost *afraid* of him, I am always wondering and guessing how he's going to be.  I just - I don't think it should be like that, for him.  And I think we need to have Anthony surrounded by people who don't think it should be like that either.  Who don't just say to me, "that must be so awful", or "as the parent, it must be really hard to see him like that".  Um, of course it's awful for us, but you know who else it's awful for?  Anthony.  As his parents, we have to fight and get him the best care and therapy that we can get him.  We are here to take care of Anthony and anyone who is helping us but failing - well, we just can't have it.

Anthony has *autism*, this is the fact.  I can't expect him to behave any other way than the way that he behaves.  I do, however, hold supposed experts to higher standards.  I am sick of putting so much of this on me and Mike and especially on Anthony.  We're just not going to do it anymore.  We're going to demand better help for him and if we can't get it where he goes to school now, we'll just figure something else out.  I'm disappointed in how we've been treated, but in a way I feel very free and able to help Anthony in a way that I haven't in a long time, if ever.

So we're going to plug away and try and continue to get Anthony the best treatment we can.  He has one more week of school and then he is off for two weeks for camp, which I think will go really well.  Then he starts back at school and they are going to start toilet training in earnest.  So I'm bullish for the future, once again, but I'm actually LOOKING at the future in an honest way.  I'm a smarter and wiser mom, or something.
Posted by Joanne at 10:04 AM