One thing I have been grateful for (seriously, there's just the ONE thing, in my whole life, ha!) is that although Anthony has tantrums, and although he can be a bad sleeper, he would rarely have a tantrum when he should be sleeping.

That has changed here lately.  I am praying and praying and hoping and reading and working and trying to make it better for him and instead, it's getting worse.  A few weeks ago, he started waking up in a tantrum, around 7:00 or whatever.  So it stunk but at least we had stuff to do, we got up and got him dressed and he went to school.  This week, we are reaching a new low.  Sunday night he went to sleep around 10, I guess, and woke up at 4, which seemed super early to me since Mike and I stayed up to watch The Killing until 11.  He had a giant meltdown, was so upset, for almost an hour and then he calmed down but was awake for the day.  Monday morning he woke up at 3, same way, upset and then up for the day.  So when he started screaming this morning, and I looked at the clock and it was TWO, I was surprised but not really.  I have never had this experience before - where every time I think it will get better, where I think it can't possibly get worse, it does.  And it does with a BANG.

He did go back to sleep at some point this morning but he got upset on the way to school.  It's like there's more and more time where he is having a tantrum and less time where he is just happy.  It's so bizarre and it's beyond depressing.  It's also worrisome to me because I am trying to get some rest, because I am having a BABY who I am supposed to be taking care of.  I just - I don't know what the answer is, here.  I am thinking that if I had my own house, or apartment, that might be a good start.

BUT here's a picture!  Anthony has a new(ish) therapist, Kristi, and she is with him on MWF mornings, so she is going to be going with him on most of his outings this summer.  I asked her if I could post this picture, it's so gorgeous, such a great picture, and Anthony really looks like he's having fun, right?  I wish I could impose it on the inside of my eyelids so when I closed my eyes I could always see him so happy. 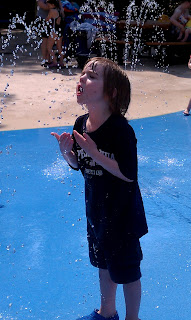