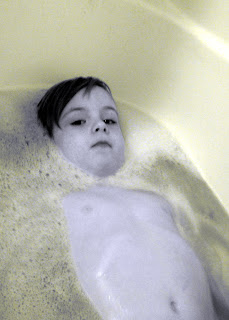 So Anthony was six yesterday! He had a better day yesterday than he had in a while, largely because he went to sleep the night before at a decent hour. The two nights before that, Mike and I inadvertently woke him up and then he had large, amazing tantrums for a LONG time before he fell asleep. It was around midnight both nights, which is way too late, plus it's just an awful, horrible way to go to sleep. For him and for us! He had a good morning at school, he had what I guess was a pretty bad upset right when he got home for therapy, and then we had a pretty good afternoon and evening. He doesn't really like sweets so we tried an ice cream cake, an oreo one, but everyone liked it but Anthony. More for us, we said, ha! We bought him a swing for his birthday, actually my parents and Laura went in on it too. I'm going to go to the hardware store this weekend and figure some way to hang it. I hope he likes it but I bet he will. The thing to do now is to keep it away from his sisters.

I feel bad because I honestly can't be like, "it's all gone so fast!" and "where has my baby gone?". I mean, I have been here for all six of these years and they felt like six years! I don't have whatever gene there is that makes a person wax poetic about what can be very long days and nights. But it does surprise me sometimes, when we put a pair of shorts on him, and these giant long legs stick out of it and I think 'whose legs are those?'. Who is this little man? And why is his hair so long? But mostly I can still see that little baby in there, I will always think of him as that little baby, when it was just him and me for so long. I think of us going for walks and just being together, the two of us. I know that little baby is still in there - ha, I'll probably be like that old woman in that I'll Love Your Forever, the one who drives across town and gets the ladder and climbs up into her son's house to rock him like a baby. Anyways, happy birthday Anthony! We couldn't love you more and we look forward to the coming year. And maybe a few less tantrums. :)