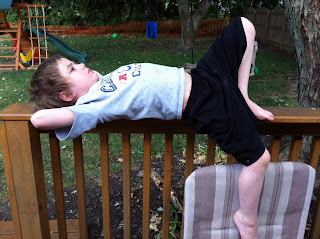 This was Anthony, on Sunday.  Our weekends are still rough but they are better, always, in the summer.  This has been a difficult summer because it's been so hot but it still beats wintertime.

So Anthony had a great, great week at camp last week.  I think he did so much better this year than last because a) he is older, b) it was just for one week and c) and most important, he went with Kassi, his therapist.  She is wonderful with him and I just know he felt better and more confident with her there.  We have had our ups and downs with his school but we are so lucky that we can do something like this and have a therapist go with him to things like this camp.  I forget if I said but it's called Camp Ability and it's run by Easter Seals/Crossroads.  I didn't know too much about the particulars this year because I never dropped him off or picked him up but it's a great, affordable camp for special needs kids of all kinds and we're lucky that it's so close.

I never update anymore, but what is there to say?  He started PECS this week and his afternoon therapist told me yesterday that he did great.  She was VERY enthusiastic and she said that she thought he'd do well but he surpassed her expectations.  So that was good.  I am hopeful, maybe stupidly, but whatever.  We have to make something work, specifically with regard to this damned potty training.  It's a year this month that we've been doing it!  A year!

So we are plugging away.  I am of two minds on summer, I'll be so glad when SOME of my children (coughMariacough) go back to school but I want the weather to stay nice.  Of course, it hasn't been that nice so maybe it doesn't matter anyway.  Maybe I'm of more than two minds, ha!