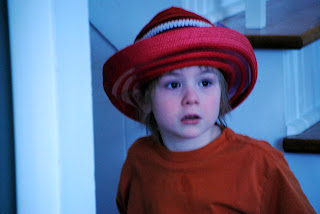 Ha, he's a red hat! Mike said he just put this on yesterday and was playing around while wearing it. He's so cute in it, right? He's so gorgeous, to me. The lady at the Y the other night kept saying, "he's so good looking!" and I think she was sincere. This poor baby, Mike was saying, his little baby teeth are getting ground down to nubs. They still look like teeth but they are smaller, it's so weird. I am hoping and praying he can move on from teeth grinding once he has his permanent teeth.

Well, it's Sunday. Laura babysat last night and although he had a rough start, she said he was asleep by 10:00, which made me cry with relief when I heard it. He was up around 8:00 this morning (three LONG hours after his sister Veronica was up) so hopefully he'll be able to get back on track. We are just going to keep plugging away here and trying to make things better. We're going to get an iPad with our tax money and we're going to get a dog, maybe, and we're just going to figure it out. Probably.

He is beautiful and the epitome of innocence.