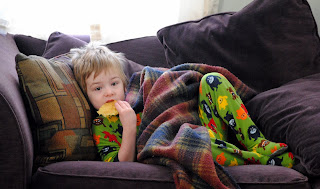 Isn't he so cute? He just got his waffle this morning, after sleeping LATE (well, 9:00. That's half the day to his sisters) and cuddled up on the couch. He had a hell of a hard time last night but fell asleep around 11:00 and then slept all night. Things are better since we are putting that tape around his pajamas but they are still not great.

I said to Mike last night, you know some day a week is going to go by and he's not going to have any tantrums. I said, one day we'll be putting them to bed and we'll realize he didn't have one and then the days will just start to add up and he'll not have them so much! I said he's not going to be a 15 year old, in that room, throwing himself to the ground. I am hoping and praying this is true. I can't imagine the relief that we'll feel when we are not waiting for those meltdowns so much. We are getting very tense and sad as people, so I hope it doesn't last too much longer. It's already affecting my looks - I always tell people I feel like if you looked at a picture of me today and of one four years ago, it would be like looking at a President before and after he served. A president who went to WAR or something, ha!

Okay I just found your blog and haven't read all the way through it, but this one post tells me I need to read everything you have here. I've thought that same thing -- it's amazing how I've aged 15 years in the 5 years since my boys were born! How does that happen? And 5 years from now, am I going to be amazed at how much younger I look NOW?