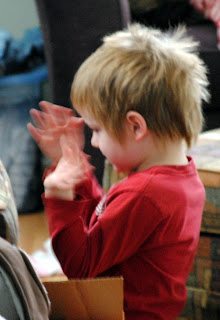 Ooh how he loves to whip those hands around! I was going to write about his room today and I have a funny story. Well, not funny but whatever - Mike and I went to see a play last night and my sister babysat. She said Anthony made noise in his room until around 10:00 and I checked in on him when I went to bed, around 11:00. I saw a diaper on the floor and Anthony was lying on the bed, naked as a jaybird and all stretched out like Hugh Hefner or something. He likes to be naked, for sure. I put a diaper on him and covered him up and he never even woke up.

There's not much in his room. He has his bed, which is just a mattress and box spring on the floor. He has his dresser, which is actually Mike's old dresser, but we have to turn it around at night so he doesn't open the drawers and climb up on it. One morning, before we started to turn it around, he climbed up there, threw up, and then lay down and went to sleep! CRAZY. He has a beautiful window film on the lower half of his window, it looks like clouds and blue sky. On the window, he has a great, EXPENSIVE Levolor cordless blind, but he broke it so it's just sort of balanced on the window. The doors are off his closet, as he used to TEAR THEM DOWN during 'quiet time', before I realized that he is not the kind of person who wants to have quiet time. He has his rugs from Target on the floor, and his beanbag from Pottery Barn, and that's it. It's a boring room, but we can't leave much in there because he'll just mess with it. I think in the new house I'm going to do the same thing, put the same stuff in there, but I am going to get a few more rugs with different textures that he might like, and I think I'm going to get him a chair that folds out to a bed. No matter what, he is awake for a few hours after he goes to bed, so I figure he may as well enjoy himself. I hope he is happy in the new house - his room will be bigger, I hope it's not strange to him. I worry about it a lot but I also figure, what can we do? We are moving in 3.5 weeks, that's all there is to it.