We will be waking up in our new house, God willing, four weeks from today. Our new kitchen is super nice and I am looking forward to having some cabinets that I can reach. Our new buyers are coming tonight to measure our kitchen, they are going to do some "remodeling", my Realtor told me. At first I was super offended, but really, the house is 17 years old! Some of those cabinets don't even have doors, because Anthony has stepped on them to get to the countertops. So I'm not offended, but I do really love the kitchen.

Anthony and I spent a lot of time in the kitchen when he was little. I always say about this house, "if you're not in the livingroom, you're in the kitchen", because there are just two rooms downstairs. I used to put him in the swing in the morning and unload the dishwasher and somehow the clinking of the glasses and plates would soothe him and that's how he started taking a morning nap. I used to keep him in his bouncy seat up on the island or the table, so he could be at eye level. He never liked to be "up heeeeere" on the counters the way Maria did, though.

He opens the fridge now when he wants something, and if he can't get the package open, he'll bring it to me. Our new fridge is similar to the one we have now, so at least that will be the same. I am going to make a NEW rule in the NEW house that they can only eat in the kitchen or the dining room and I am determined to stick with it. It has gotten a little crazy around here with the food - all three of them go anywhere they want with food and then I find a RIDICULOUS old hot dog downstairs, like a month after it was left there.

He had a rough morning today. He somehow got out of his pajamas in the night and it was kind of a mess in his room. He had to take a bath and it seemed to mess him up, as he usually takes a bath and then goes to bed. Plus Maria and Veronica are ALWAYS all up in his grill, it would make anyone mad. I think he's mostly a very patient boy. 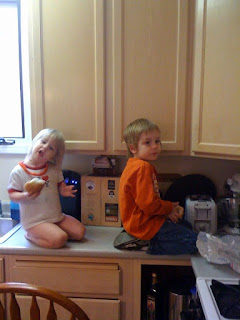