This is one of my favorite pictures of Anthony, Mike took it and we used it for his birthday invitation that year. He seems like he used to be happier, right? And laugh more? Ha, me too, I keep thinking. I wonder if parents of typical children feel this way - are they all just less complicated when they are 1.5 or 2 years old? I guess for us, we won't know until we get Maria to that age - which feels verrrry far off, indeed. Sometimes I think she still has THREE years until she goes to Kindergarten and I just - well, it seems like she is a lot older than that.

Anyway. Back to Anthony and his happiness. Sometimes, even if he doesn't seem happy, he seems content. Unfortunately, he seems content when he is, like, stimming with his hands, in front of his nightlight or something. Normally, I would say, I don't care - if he's happy doing it, he should be able to do it! BUT I think it can actually be harmful to him, so we try and move him on to something else. We try to redirect him from what's making him HAPPY to something that will make him UNHAPPY in the short-term, but maybe happier in the LONG TERM Of course, he doesn't care about the long term, what child does? I don't know, but I don't think there are many kids saying "gee, thanks, Mom, for not letting me do this thing that I think is super fun, so that I'll be happier many years from now". 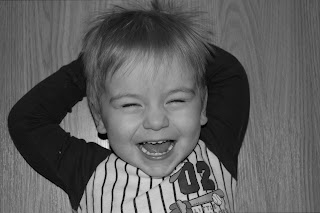 We are moving at the end of the month and we'll be in a new school district. It's supposedly a better one, I've heard a lot of great things about it. We intend to send the girls to Catholic school, so I don't really care about it for them, but I'm excited about it for Anthony. He is going back to Little Star five days a week, starting right after Thanksgiving. I feel like it's the right choice, he misses some things at school because he's out a day, plus he doesn't get to work with his Tuesday/Thursday therapists as much and it's harder for them to get to know him well, etc., etc. Our new house will be a little closer to his school and that will be nice too. These girls of mine are getting SICK of the long ride!

Anthony had a good morning today, which of course worries me that he will have a bad day at school. It seems like if it's not one time of day, it's another, for him. I am looking forward to when he is just HAPPY, or CONTENT, or at least not so sad/mad at least once a day. I'm hopeful it will be soon, maybe we'll all get it for Christmas. :)

that's a struggle for all of us- to help our kids be foundationally content and peaceful not just eating candy and watching Elmo ;) Still- it is a struggle no matter what to be the one who has to do the redirecting. I love that photo.

That photo is awesome!!