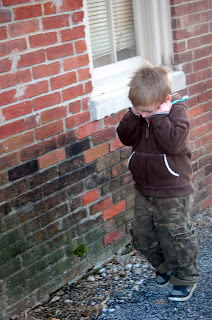 Posted by Joanne at 7:47 PM No comments: 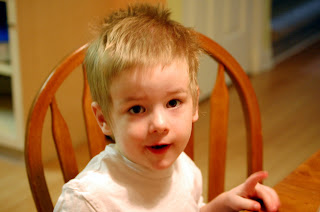 Of course we are thankful for Anthony. Tonight we were downstairs before he went up for his bath and I said "I love you" and he said "I You", which is his version of it, so that was sweet. He loves to climb up on my chair when I am holding the baby and rub against my back, but I am trying to make him ask for it, but I don't know what to call it. Today he was pawing at me and I said "what do you want?" and he seemed confused - I mean, I think he would have said it but he really has no word for it. So I said "Mommy?" and he said, pleased, "Mommy!". It was super sweet. I am thankful for the insurance mandate in Indiana and I am thankful for his school and therapists. I am thankful for his sisters and I am thankful for his father. I am thankful for his grandparents and his aunts and uncles (and really mostly for his Aunt Laura, who comes over regularly even though it is insane here and we eat every meal in like six minutes or less). I am thankful for the dips and turns in his life. Right now he is going through kind of a hard time - well, it's hard for me. He seems a little bit removed from me - he is not making much eye contact and seems, for the most part, to prefer to spend time alone. As I said, they say how he is using all these two word phrases at school and he's not doing it so much at home. I am impatient, and I am grateful that he has days, even when he is not at his best, that he will say "Mommy" and "I You". Because I him too. :)

This would have to go into the 'no sh*t" category, as far as I'm concerned.

It is never hard to parent Anthony, it is never hard to be his mother. It's harder to be Maria's mother, I swear! It is the easiest thing in the world for me to love him. But it is hard to be the person that cares for Anthony and is his only voice in the world, long past when a mother of a typical child would need a voice. It is hard to have your heart broken daily when you see another, younger child, speaking and communicating and most of all, enjoying their normal life, and wonder if Anthony will ever have that. It is hard to not know when Anthony's next freakout is going to come and worse, it is hard to not know how to help him. It is hard to have him look me in the face and say "oweee" and not know what hurts, or if it is even in a place where I can reach it to kiss it and make it better. It is hard to feel so helpless when you are supposed to be the one that can help, that can make it better.

When I was little, my brother Larry got sick and I know that it was very hard on my parents and other adults in my family, because they didn't know what was wrong with him for a long time. They didn't know if he would survive it, or if we would all get it, or what. I feel bad even worrying about my problems with Anthony when there are people with bigger problems, MUCH bigger problems. But I do sometimes feel vindicated when I read a study like this, because at least it means that someone knows what we are going through, and what we are all trying to do for our kids.
Posted by Joanne at 1:43 PM 1 comment: 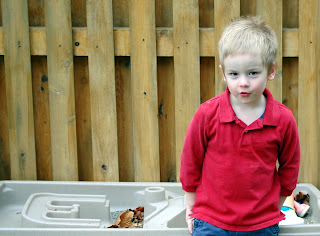 Today was a preschool day, so he's in his uniform clothes. It's going well, Mike takes him and picks him up because it's hard for me to get out with both girls. Today they were both sleeping when Mike got home. Anyways, it's still warm enough to play outside so that's what we were doing.

Posted by Joanne at 3:09 PM No comments: 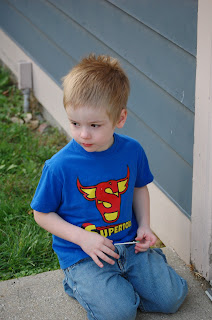 That is NOT a lollipop that I gave him, which means that it's one that he found in the yard. There goes that Mother of the Year award.

He is doing well, he had a "four" day in school today. They said he is using more two word phrases but I don't believe it. I mean, I do, but he's not doing it so much at home. He's back to his morning preschool tomorrow.

Posted by Joanne at 5:30 PM No comments: 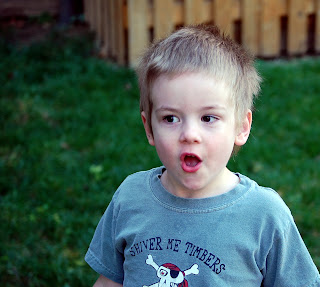 He has been a little fretful today, we had major issues this morning because the Wiggles DVD kept skipping. But he's having a better afternoon. He's also been sleeping well, but I'm not going to mention it.

Posted by Joanne at 2:24 PM No comments: 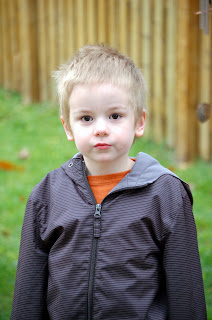 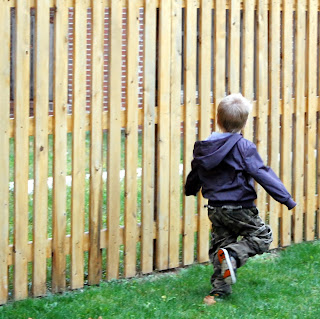 Anthony got a '5' this morning in school, which is for the best day ever. Mike said he seemed very happy to be back there this morning. Wouldn't it be nice if he did well at his preschool and therapies there and if they added to his ABA therapy? Wouldn't that be something?

Posted by Joanne at 4:53 PM No comments: 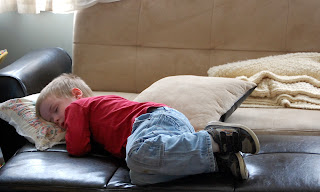 He woke up early, we don't know who woke up whom, but they were both pretty noisy by about 5:00. Hopefully he'll go back to school tomorrow. I think he's just tired and not sick, he ate a good lunch. We'll have to see how tonight goes! 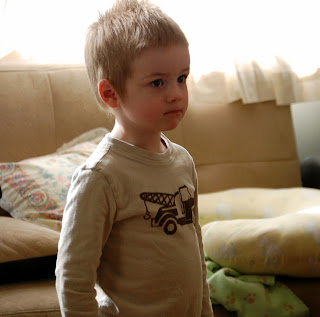 Now he can go back to school on Monday. Sigh. It's been very frustrating, dealing with his school. But I suppose this is how it is, right? I know all my friends whose kids are in school or daycare or whatever have to deal with some kind of nonsense or another. I have to say, it doesn't really make me feel like a Mother Warrior, like that jackass Jenny McCarthy would have you believe. It just makes me feel like a mother. I told Mike the other day, after Anthony's IEP, those meetings are depressing because no one in them really cares about Anthony except me. I'm sure that in their own way, those bureaucrats care about Anthony, but no one believes in just Anthony, no one believes that some day he'll be able to go to a regular school, no one believes that he'll be okay except me, in those meetings. But I'm the only one in those meetings whose job it is to believe it, I suppose.

Anyway, he's mostly better. He hasn't had a fever for two days, but he is still a little puny, so I think we probably wouldn't have sent him in today, anyway.

One Year Ago Today 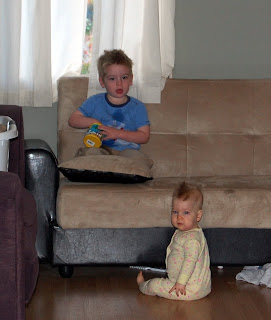 He's sick, and he looks wan and pale, so I'm not taking a picture of him today. That stupid school of his has started a new policy, so because he had a fever this morning, he can't go back until NEXT WEDNESDAY. I am beyond steamed, I had a long conversation with the director who made this policy this morning. She's very nice, but it's a STUPID idea. I told her she is throwing out the baby with the bathwater, and the baby is AUTISTIC and likes a ROUTINE. GRRRR. I am MAD, hence all the CAPS. He's doing better, though, and Mike is home tomorrow, so there's that. And isn't he cute? 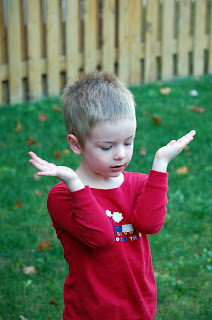 Oh, Anthony. He's outside here, in his railroad train pajamas from Halloween. It was super gorgeous here today, they were outside quite a bit. I think maybe he's hitting his head less? He seemed kind of fever-y this afternoon, but he took some Tylenol (thank GOD he is taking it again) and perked up before bed. I will have to keep an eye on him tomorrow. Today is sweet Mike's birthday and he spent it with these children - he took Anthony and Maria for a walk or two, and gave Anthony his bath and bedtime routine like usual. I tried to get Anthony to tell him Happy Birthday, but no dice. Maybe next year!

Posted by Joanne at 9:28 PM No comments: 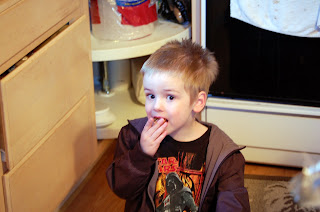 BOY is he hungry when he comes home from school! He's been eating well at school, too, and he has a snack at 2:30, but I think he likes to eat with abandon here at home. He loves to carry around the big giant thing of pretzels that I get at Costco, and he loves to snatch them away from Maria. He will share with Mike or me, but not her. She's a pain, too, though, so I don't blame him. She only wants things that he has. She does love him, though. She gave him a big kiss tonight when he was lying on the floor so I could change his diaper. "Muah!" she says. Later, Mike asked her if she wanted to go downstairs (he usually takes them both down there so the baby can nurse and be settled down) and she went over to Anthony, right away - "Downstairs? Downstairs?" He went, but not with her.

He is going to start going to his old preschool one day a week, starting the week after next. He's going to get occupational and speech therapy there, so we decided that it would be best if he went from a classroom setting, instead of just dropping him off for therapy. Then he'll be home with us one afternoon a week. We'll see how it goes. I think it will be okay, even though his ABA people seem unsure about it. We're not married to it, either way. If it seems to not be working well for him, we'll stop. The possibilities are truly endless, we could do ABA at home, if we needed to, although I'd rather not. Hopefully it will just work out, we'll see. He is doing very, very well. Monday I went to get him and, with some prompting, he said "Hi! Hi Mommy!" So that's promising.

Posted by Joanne at 7:32 PM No comments: