Five for Friday - On Friday!

Posted by Joanne at 8:57 AM No comments: 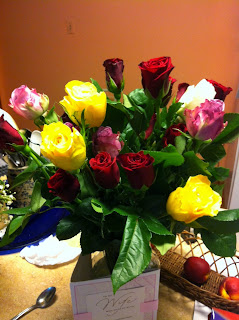 These flowers are from my cousin Wendy and her husband Curt.  It's a big deal, right, 50 years?  FIFTY YEARS!  My mom says it doesn't feel like 50 years but man.  FIFTY years.  Anyways, the flowers are beautiful and really cheer up their house.

Posted by Joanne at 3:19 PM No comments: 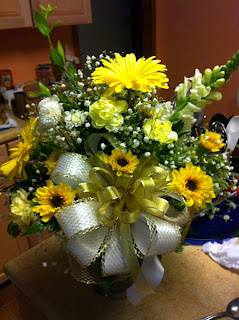 Here are the flowers my aunts and uncles sent to my parents for their 50th wedding anniversary, aren't they pretty?  I wanted my Aunt Joan to be able to see them.

Posted by Joanne at 3:16 PM No comments:

I have to write this down and I have to record what has happened.  I know that it's super lame, especially because it's FRIDAY NIGHT and this is what I'm doing, but I have to have a record AND I'm really, really happy and proud.

Tonight Anthony got home from school and he hung out for a while, then at one point he went upstairs and I followed him, because we didn't know if the doors were open or whatever.  Normally, we'd just let him go outside and run around, but it was pouring down rain.  ANYWAY.

So I went upstairs and he was lying in Maria's bed.  I said, come on let's go downstairs, and he got up and went into Felicity's room.  I shooed him out of there and then he was kind of pulling on the railing, making me nervous, so I said hey, let's go downstairs.  He went downstairs, but backward and I was facing forward, so it was kind of hair-raising but we made it with no one falling.

SO.  We kind of wound our way around toward the kitchen and the bathroom and then ANTHONY HANDED ME THE 'BATHROOM' ICON AND WENT IN TO THE BATHROOM AND POOPED ON THE TOILET.  That's RIGHT!

Ooh it was exciting!  I said yay, Anthony!  Maria came running in to look at the poop and she said, barely able to contain her excitement, HE IS POOPING MORE AND AGAIN!  Once again, as always, I am glad we don't live in an apartment, ha!

He was so proud and happy.  It was an amazing experience.  He is also doing a thing where he screams and screams, just to feel it or hear it or whatever and THAT is driving us mad, but I am going to dine out for a LONG time on this poop. Eww.  You know what I mean.

I don't really think OT and ABA have to be at odds, but it feels like it sometimes.  In four years that Anthony has been at Little Star, he's also gotten OT for maybe ... three years of that time?  Maybe two, I'd have to go back into my files (that do not exist) and find out, so let's say 2.5 years.  I think he does much, much better when he is in OT as well as ABA.  I think the perfect combination was about one year ago, when there was an OT at his school, one who worked with the ABA therapists and also with Anthony.  That OT is the one who recommended that we have Anthony see someone about getting him into some leg braces, she was a wonderful resource.  Of course, now she's not there anymore, there's a part time OT but he sees a lot of kids and it's just not the same.  I don't hold anyone accountable for that, it's just the way it is - the insurance company cut Anthony's school's reimbursement by 20%, which STILL makes me mad but whatever, that's not even as bad as it's going to get, I'm guessing, so I am saving my ire for when it really counts.

Anyway, when I approached Anthony's school about him getting OT outside of school hours, billable hours, I felt some pushback.  One of the reasons was because Anthony is prescribed 40 hours of ABA a week, and they have to charge for all that to stay on track, so he can't have an OT come in during the time that he should be doing ABA, because what would the ABA therapist do while he was getting OT?  This is a good point, I feel, but it still left me kind of stranded when it came to getting him some OT on a regular basis.  I found a place that does OT and that has evening hours.  He now sees an OT on Tuesday nights at 6:00 - this is perfect because I never work on Tuesdays, so I can take him and sit in the waiting room for 50 minutes by my damn self and it's just great.

I went last night and he did very well.  I could hear him - or I should say I *couldn't* hear him, for most of it, which tells me that he is content and doesn't need to hoot and holler to stim vocally.  Amy, his therapist, told me that he picked out colors when she asked him to and she said she should have known that he knew his colors, but it surprised her for a minute.  I said he knows everything and she laughed.  I said I know it sounds silly but he does - I feel like he knows everything he's ever been taught.  When he was Felicity's age, he knew how to count to 20, his colors, all animals, his alphabet, just everything. Felicity only knows Max and Ruby but because of some different wiring, SHE is going to be fine and he struggles and struggles.  It's such BS.

Anyways, I think this is an interesting link, which describes the differences between OT and ABA, and which talks about what they ARE and what they ARE NOT.  One of the most interesting things is that Occupational Therapy is not a new phenomenon - it's over 100 years old.  I think that might be interesting to people who are in their 20's and who think OT is some kind of magic voodoo or something, that there's no science behind it.  Not that I know anyone who thinks that, ha!

Here's a video of Anthony, from yesterday.  I watch it over and over and try and figure him out but I don't think I ever will.  Why does he move his head like that?  He is watching the Wiggles here, which is the only reason I think he's sitting as still as he is.  He moves a lot, it's one of the reasons I think it's been so hard for him to get a lot out of his art class.  I imagine it's hard for lots of seven or eight year olds to sit still for 90 minutes but man, he needs more and more breaks every week.

Today we had a little party for Veronica, she'll be four on Tuesday.  It went fine and we just had our parents and my sister and a friend of mine and her kids and Anthony just lost his mind, a little before 5:00.  He was absolutely inconsolable, screaming and crying, and basically, I guess, having a meltdown, like he used to.  I hate to think that it's starting again.  I guess we just have to take one day at a time, but if anyone was ever reading this and thought they had anything for us to try, I'd listen.  I'd listen a LOT.
Posted by Joanne at 6:11 PM No comments: