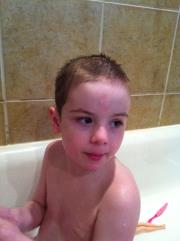 Well this is a big deal, right?  That was a lot of hair we cut off of him yesterday.  Mike and I have been noticing that his hair is kind of tangly again and it's been super hot here so we decided we'd cut it in May and then yesterday morning we just decided to go ahead and do it.  We sat him in Veronica's chair and put the cape on him, he was fine but whiny, tense.  I cut it with scissors and then we used the clippers and then when we were finished he FLIPPED OUT but then he got in the bath and then he seemed better.  I hate to upset him but I think ultimately it will make him feel better.  It's so hard to tell.

He has been doing well at school and not so well at home.  He is unhappier than I would like him to be.  He is also bolting a lot lately.  I think it's a combination of his age and the weather.  I think instinct wise, everyone is a little nuts when the weather gets like this IN MARCH.  The girls are kind of crazy, too.  I mean, it was 81 today and is going to be 83 tomorrow!  Sunday in church he ran away from us, not once but twice and the second time, I thought for sure he was going to run right up on that altar.  I could see him in my mind, breaking some hundred year old statue, sheesh, I was DYING.  Also, to add to the hilarity, I had the baby in the carrier on my chest, but we were both SOAKED because I brought this stupid dud bottle that leaked all over both of us.  She was pressed up against me but I needed her to cover me because I had kind of a wet tshirt situation going on IN CHURCH.  Ay yi yi!  It was crazytown, indeed.

We went to the park on Saturday and we ran into an old therapist of his.  I am friends with her on Facebook, she is super nice and has two little kids herself.  Anyway, she was saying that Anthony was always special to her and he reminded her of Peter Pan, which I thought was so sweet.  I don't think this about all my kids but I do feel like Anthony has a very special way about him, outside of everything else, where you just want to love him.  Ha ha, when he is crawling all over the countertops and knocking stuff down and breaking glasses, I think to myself that he may be difficult to LIKE or to LIVE WITH or to keep a CLEAN HOUSE with, but he is so, so easy to love.  It feels like breathing, to me, loving Anthony.  Anyways.  That's our update on Anthony.

Oh!  I forgot!  He has been driving us mad, MAD, I tell you, with this taking off his pajamas.  We have had a few incidents wherein Mike and I are doing major, MAJOR clean up of his room in the night, and it stinks.  The duct tape that we put around his pajamas just wasn't working anymore and it was super frustrating.  So I googled 'autism, removing pajamas, help' or something and I found these.  They are PERFECT and they weren't expensive at all.  We bought three pair and we might get more.  He is going crazy taking off his clothes on the weekend and when I go to work it's very hard on Mike.  This is funny, actually.  We have a giant window in our living room that looks right out on the street.  I used to have a bassinet filled with stuffed animals right in front of the window and a few times before I moved it up to the baby's room, Anthony has thrown those animals out and gotten in with NO CLOTHES and one time he POOPED in it!  I know it's gross but it's kind of funny because I'm all, Anthony, really?  We have to do it in FRONT OF THE GIANT WINDOW?  Sheesh.

Anyways, the pajamas are working out really well.  The are such a nice light material, I'm much happier with them for summer than the fleece ones anyway and they are snug to his ankles but don't have feet, which I think he prefers.

He has some more outings coming up at school which I'm sure he'll love.  I am signing him up for camp again this week, it will be in July and just one week.  We are moving forward, which is all that matters, I suppose.
Posted by Joanne at 11:32 PM 1 comment:

Anthony is sick, and he can't go to the circus today, which was the scheduled field trip at school.  That is the bad news.  The good news is that he is by FAR the healthiest of all four, well, maybe it's a tie between him and Felicity, but he has only thrown up once, yesterday, and nothing since.  Now his sickness is taking the form of sleeping in this morning and being incredibly noisy and fretful about being home from school.

There's a woman who I read on the internet who has twins who are nine months old and one is in the hospital, with RSV and has to have oxygen and she is nursing both, it sounds so horrible and impossible.  I am trying to think of her this week and think of how even though all the kids are sick, they are all here and not in the hospital. I am tired but I'm not as tired as I could be.  We have, overall, been lucky this cold and flu season, but still.  It's a pain!  And he doesn't care about going to the circus, I don't think, but I'm still sad about it.
Posted by Joanne at 12:45 PM No comments: