I haven't posted since February.  But today I was going through my email and I found this cute picture of Anthony eating salad and thought I should post it.  He has been making HUGE strides in the eating area lately.  He goes out to eat once a week with Little Star and he's been eating a salad with every meal, with ranch dressing (ugh, ha) he eats burgers, pizza with all sorts of stuff on it, eggs, omelettes (although he only eats those at Little Star, we have no success with it at home yet), tacos, the list goes on and on! We have been trying to give him lots of fruits and veggies and protein, less bread and sugar, and less processed food and it's been great.  It has, of course, not been without its problems.  He only ate the same foods for a long time and it has been doing kind of a number on his system to have new foods introduced.  But it will be better in the long run, and it's very exciting.

He is taking a new medicine in addition to his old medicine for epilepsy.  Apparently it tastes bad and we had been putting it in a smoothie (with prunes, bananas, strawberries and almond milk) but he has gotten sick of those so we have just been making him suck it up.  It is frustrating to see a neurologist for anything.  Maybe they are so smart by the time they know that much about the brain that they just can't relate to anyone on a human level? But he is on his third and they are all just - ugh, the way that they are.  Difficult.  He was having a lot of seizures in March and we called to get an emergency appointment and the soonest he could get in was April, six weeks later.  It's insane, it's like, it's your kid and he has seizures, a rare side effect of which is SUDDEN DEATH and you are just supposed to assume it won't kill him to wait.

Also one of the things that causes seizures for Anthony is exhaustion and some nights he is just ... awake.  We can let him sleep in and we do but it would be better, I think, if we could give him some kind of a sleep aid at say midnight, when he is not going to be able to sleep on his own.  I asked Mike to ask the neuro about it and she said have you tried melatonin?  Not for nothing but I was hoping for something a little less likely to be recommended by the clerk at the GNC! What the hell?  I have heard from many people that melatonin has been successful helping their kids fall asleep but not stay asleep, so I just - I thought maybe a MEDICAL DOCTOR could help me out.  Wrong again!

We are having no success with a respite care taker.  We had one that was coming on Saturdays but she canceled/rescheduled for the third Saturday in a row and we asked for her to be taken off the case.  It makes me cry to talk about it, it is so frustrating.  It is someone's JOB to find someone to do this job and yet, here we are, YEARS into it and just ... nothing.  It's really hard to find staff, they tell us and I just sit there.  And? It's hard for me to do my job too! I'm a teacher and sometimes kids don't want to listen, they sometimes don't want to learn but do I say, oh well! We are having a teaching problem right now!? NO!  This is for respite for US, so that we don't go crazy as caregivers and lose our minds and just ... not much of a priority for anyone.  It's very depressing.  Then I talk to his case manager about it and she says he can have music therapy.  I'm like, can he do hippotherapy?  NOPE.  Okay then.  Thanks anyway, Indiana!

He hit Felicity twice yesterday and knocked her down.  The first time she bounced up and said I'm okay! but the second time she was really sad about it, which makes ME really sad about it too.  Why does he DO that?, I'm always asking Mike, but no one knows.  Eternal mysteries abound at out house.

Good things, let me think of good things.  He is better in the car.  He had a bad weekend but before that he was hitting me less and less.  He has been having less seizures.  He is good at Little Star, for the most part, he loves his therapists right now.  And as always, they love him too.  He is super lovable, thank GOD because if he wasn't, I'd really be out of my mind.  MORE out of my mind, ha!  Here's that cute picture: 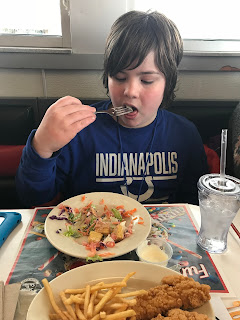 Posted by Joanne at 2:00 PM No comments: