Victory in our Time

Last night I was driving Anthony to OT, the traffic is horrible.  They have been doing construction on this route forever, months and months.  It's so frustrating and I am just grateful that we only do it once a week.  Anyway, I was sitting in traffic and Anthony started grabbing at my shoulder, pushing at me.  I offered him my water and he pushed that away, so I got his iPad out of his bag and gave it to him and right away he said "I need to go to the bathroom".  I said okay, give me a second, and I got out of my far left lane of traffic and shot over to the right so I could get to the next light and then to the NEXT light and then park at a Hardees, where we ran in and got into the bathroom where he peed for two minutes straight!  I was super excited and kept telling him, great job, Anthony!  So we were leaving and he pulled me over to the counter where I bought him a Sprite.

It was so, so great.  First, he used his iPad to tell me something, THEN he held it until we got to the bathroom and THEN he knew that he deserved a reward AND where it was.  We had never been there before but of course he's been to fast food restaurants before and knows where everything is.

Then he went to OT and worked with his new therapist, who he really seems to like and who seems to love him.  It was a really great and sweet victory.
Posted by Joanne at 10:08 AM 2 comments:

Christina went on vacation last week and we all missed her, but she's back this week.  She and Anthony went to a park on Monday night and she sent us this picture: 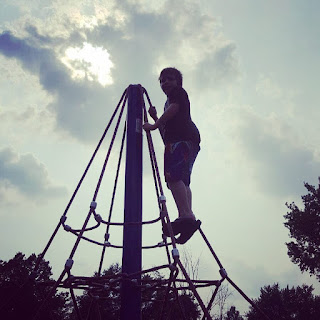 He loves to climb all the way to the top of whatever it is, a rock wall, whatever.  He is doing okay, I guess, although he gets really mad sometimes.  He was screaming and crying the night before last so much, and so late, that I thought he'd never calm down.  I don't know why he gets the way he does.  When it happens I feel like I don't know anything.

He is doing really well at Little Star, he worked with Pam, one of his long time therapists, this week and he did great.  She told me yesterday he made 56 unprompted requests from her in just one afternoon.  So it's pretty normal, he is doing very well at Little Star and just all right here.  I can't be engaged with him every second of every day, particularly because Felicity is being SUCH A JERK lately and they are arch enemies and we spend most of our time just picking stuff up off the floor, wiping up water that he's spilled, or pulling them off each other.  It's pretty miserable, now that I think about it.  I guess we should just look at the picture.