A quick note about Anthony, which seems to be all I have time for these days.

He is doing just fine, but he doesn't like those braces!  I feel badly for him but they seem to be helping.  We went back to the orthotic guy, who was very nice, to see about some blisters he was getting and now he's been fine.  It turns out what we thought were hives was poison ivy or poison of some kind and calamine is really helping.  Want to get really frustrated and worried, though?  Google autism and hives.  People have some WHACKY ideas about autism.

What else.  He went to the splash park this week and to the zoo, on field trips with his school.  He did very well, they said he loved the dolphin show!  Whenever I hear that he really loves something like that, I am immediately thinking "well, let's get him a dolphin!".  Ha!  I am a desperate woman.

I would never talk about his sleep but if I did I'd say he's sleeping well.  He has been having less tantrums too, I'd say, if I talked about such things.  He is defining one step forward and two steps back as far as toilet training goes, but it will get better.  Hell, Veronica has been toilet trained for a long time and as I told Mike yesterday, she had a poop accident yesterday that I could only describe as volcanic.  It's complicated, I guess, and for poor Anthony more than other people, so we'll take what we can get.

He is out in the bounce house now, having fun.  We are going to lunch with some friends today.  I follow this autism dad on Twitter and he said that this year he was getting his son to try 30 different and new foods and I might do something like that with Anthony.  I'd love it if we could expand his horizons a little bit.

So far, seven is going well, so it's onward to eight I guess!
Posted by Joanne at 9:48 AM No comments:

I just read this article today and it gives me hope that maybe we won't get the screwing that Anthem BCBS is trying to give us with regard to Anthony's insurance.

When we were first looking at ABA places for Anthony, we were worried that Mike's insurance wouldn't cover it because they are a) Federal and b) self-funded and therefore they don't have to abide by the autism insurance mandate in Indiana.    Turns out we were right to be worried because they didn't cover him.  I met my friend Theresa because someone at Anthony's school gave me her number and she gave me a lot of information about how she got her son his own insurance policy and that they covered ABA therapy.

We got the policy for Anthony and oh, it was like Christmas in July!  Or February or whenever it was but it might have actually been July now that I think about it.  We were so excited and Mike said then, we should be sure to pay that premium the day the bill comes in the mail because I'm sure they'll want to get rid of Anthony for any reason.  Our premium has gone up several times, now we're paying more than double what we did three years ago but who cares?  It's always going to be better than the self-pay option.

Every once in a while*, though, we get a vaguely threatening letter from Anthem BCBS saying that they are going to look into whether or not Anthony still needs the treatment that he's getting.  And we have to take him to his developmental pediatrician every six months to reassure those bastards at Anthem BCBS that he still has autism.  It's infuriating.  So hopefully what this article is saying is that insurance companies like Anthony's will have less ways to screw over families like ours.

*seriously, they always send them so we get them on holiday weekends.  I think they want us to miss reading them so we don't know what's going on.  CREEPS.
Posted by Joanne at 3:59 PM 2 comments: 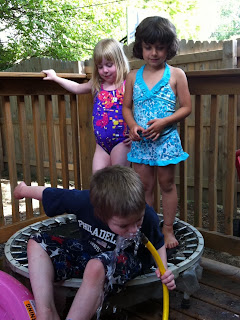 Seven years ago at around this time, I was just getting out of recovery from having Anthony, he was maybe nursing?  Ugh, who knows!  It seems like a long, long, LONG time ago, I can seriously barely remember it.  He was a beautiful baby, though, and he never seemed small, even though Maria and Felicity were both bigger than he was at birth.  He never lost any weight at all in the hospital, I used to joke to Mike that he was probably getting a lot of protein and calories from the blood he got while nursing, ha!

He had a great day today.  He slept in, hung out and played in the bounce house while I took Maria and Veronica to church.  His family came over to celebrate, and he seemed really happy all day.  At one point, Maria and Charlie (pictured) and Veronica and Maddy played in the pool and with the hose and Anthony really got into it.  It makes my heart SING when I see him having fun and enjoying his life.  I wish it happened more often, but maybe it is often enough, for him.

Mike mentioned this weekend that he thinks a lot of the time, Anthony wants to be alone.  He'll be in a room and we'll come in and he'll leave.  I think he DOES probably want to be alone, but not 100 percent.  I think for some people with autism, and definitely for Anthony, if he is alone, there can't be any surprises from other people.  If he is alone, he only has to hear the sounds that he makes, and no one can sneak up on him.   But I think it's important to force ourselves on him sometimes, in the safest and best way for him.  I feel like we can't let him be alone whenever he wants because I feel like maybe then he'll go into his own world so far that we won't be able to get to him back.  It might not be true, but that's what I worry about.

Anyways, he was happy today, happy and sweet and seemed to like the attention when we had his cake and when the girls were playing at the pool.  I went in with him tonight and we chatted and I told him that he has school tomorrow, that we love him and that we'll do anything for him and that he's always safe with us.  I tell him that as much as possible, so that in case he ever gets stressed out or he can't think or he worries, maybe that will be the first thing that comes to his mind.

In any case, I want to publicly say happy birthday to our sweet boy, we love him so. 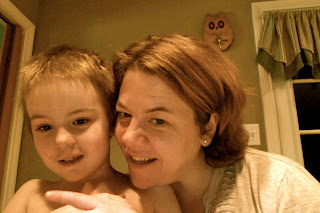 So now Anthony has hives, it's always something, right?  He started busting out in them today at school at 9:00, so they gave him Benadryl and then it got worse by 2:00 so I called and he saw the doctor this afternoon and he said hives.  I said maybe it's pressure hives from the braces and the doctor said NO but I say BS and I bet that's what it is.  The doctor said hives are very mysterious to which I said BIG SURPRISE.  We're so mysterious, it's like AGATHA CHRISTIE all the time around here!

My internet friend Bonnie reposted my last post about Anthony and my … my, what, my own personal disappointments.  She said she often feels that way but is afraid to say it or that it might offend someone or something and I … I hope no one is offended that someties I feel super sad about Anthony.  I feel super sad about Maria sometimes too, and Veronica and I have MAJOR disappointments about how Felicity's first six months went, but what the heck?  I am just a human being, I am CONSTANTLY reviewing my life, and what I've done and what I could do better.  It keeps me young, this constant thinking and reviewing and wondering about the future and the past, ha!  Anyways, I hope it wasn't offensive for me to say that sometimes it occurs to me that we are not the same as other people, and that I am sad at what we're missing, or what I PERCEIVE as us missing.  I could be wrong.  It's only sometimes that I feel that way, anyway.  My mom wrote me a really nice email after I posted that last thing and she said that all we can do is trust in God and know that we're right where we should be and I agree.  But even though I DO trust in God and I DO think I am right where I should be, it's still - it still smarts, sometimes.  I think it's because Anthony is turning seven here soon.  That seems SO much older, right, than five?  Than six?  Anyway, as usual, I am being selfish, Anthony is just FINE, he doesn't care that he doesn't go to ball games or whatever the heck.  He does care that he is all itchy, so that's what we're working on tonight.

I bought him some Benadryl but he sounds pretty happy up there so we're going to wait and see.  His doctor said it might make him sleepy and I said ho ho ho not much makes old Anthony sleepy!

Here's something funny - yesterday I had to go to work at 5:30 so I took a shower before I went to get Anthony but I didn't get to straighten my hair, I figured I'd let it air dry and then straighten it once I got home from getting Anthony.  So anyways, it was super curly when I picked him up and he could NOT keep his hands off it.  While I was strapping him in his car seat, he kept patting my hair.  I just know he could tell the difference, and I was impressed.  Unfortunately, I look like a crazed lunatic Ronald McDonald with my hair curly, so I can't wear it like that all the time, but still!  What attention to detail, right?

He is doing okay with potty training, he has had some accidents but also brought his therapist to the bathroom and gone several times at school, sooooo it's a spiral, I guess.  Just like every other thing, ever.

We bought him a bounce house!  It was like almost $300 but it was going to be $155 to rent it so I figured what the heck, I am working some extra shifts and we just bought it.  I asked my mom and sister and Mike's mom to go in on it.  I figure it's a win-win, because he's impossible to buy for and this way we can all give him a gift that we know (or feel strongly) that he'll love.  I'll take a picture when we get it, hopefully with some happy children bouncing around in it.

Lastly, isn't he so cute in that picture?  He's a real dreamboat.